Twilight Council (Legacy of the Void)

This article covers the current multiplayer version of this building. For another version see Twilight Council (Wings of Liberty and Heart of the Swarm). 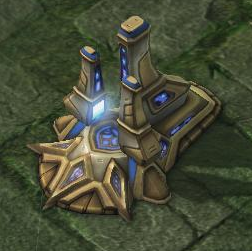 Like most Protoss structures, the Twilight Council can only be warped in at a location powered by the Psionic Matrix. It can only research upgrades while it remains within the Matrix, otherwise it becomes unpowered and cannot function. However, even an unpowered Twilight Council still meets the prerequisites for all of the upgrades and buildings it unlocks.

Two strategies require players to get the Twilight Council at specific, carefully timed moments in a build order. Firstly, as the Twilight Council researches three powerful abilities for the basic gateway units, its construction affects the timing of the first upgrade for the Protoss army, which is critically important in a competitive match. An early Twilight Council lends itself to Timing Attack or rush strategies, for example taking advantage of an early Blink upgrade, to allow for surprise hit-and-run attacks with Stalkers which can bypass ramps. Alternatively, the Resonating Glaives upgrade makes the Adept much more effective against light units, like workers, Zerglings, or Marines. (As of Patch 4.11.0, Charge no longer adds damage on impact, leading to less of a power spike, so getting it first is less common.)

Secondly, the Dark Templar Rush similarly takes advantage of an early Twilight Council to unlock the Dark Shrine for an early stealth attack with the permanently cloaked Dark Templar, intended to hit at an inconvenient timing for the enemy.

Even if other tech structures are warped in first, in longer matches the Twilight Council is still important because it unlocks key technologies for the Protoss late game. For example, at that stage Charge becomes important because it makes Zealots an efficient means of spending minerals, as well as enabling them to be more effective at harassing enemy workers. Additionally, unlocking the Templar Archives for warp-in helps research the Psionic Storm ability earlier, so the sooner a Twilight Council is finished, the sooner that ability can be completed also. While Storm timings are a rarity in Legacy of the Void, the sooner Storm is researched the less vulnerable the Protoss is to massed low-tech units, such as with an enemy all-in. Finally, a third upgrade enabled from getting a Twilight Council are the Level 2 upgrades at the Forge, and getting the Council on time ensures that these are accessible when required or even deployed sooner, preventing the Forge from idling or otherwise putting the Protoss army behind on upgrades.