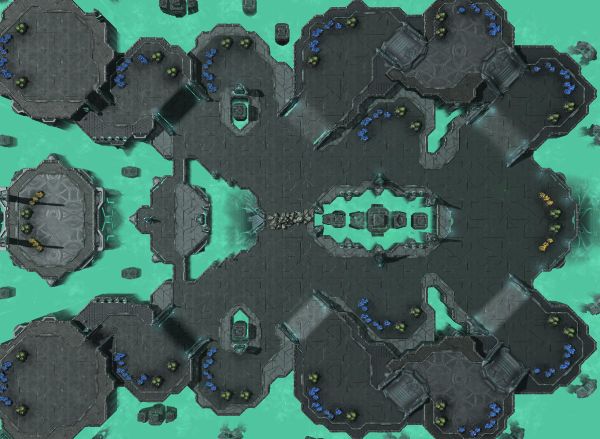 Ulrena is a two player map made by Blizzard and used in the first Legacy of the Void ladder season.

Make use of the narrow, quick patch to rush your opponent in the early game. Watch this location closely when army sizes get bigger, while utilizing the wider attack paths.

Ulrena's map design featured very little airspace between the opponent's main bases. This resulted in a multitude of very strong 1-2 base play in all matchups. While Ulrena was unsurprisingly cut out of GSL for it's radical design, it did see a season of play in 2016 Proleague. ByuL popularized the ZvT / ZvP ling-Queen drop, while Korean and foreign professional protoss found much success in PvT with a Tempest rush build created solely for this map. The narrow flight distance also lead to some intense Pylon-rushes, as the Mothership Core was still a key early game unit for protoss at the time. The maps chokes allowed Terrans to experiment with turtle mech focused around Tanks and Thors, or its relatively short rush distance lead to some 5-Rax-Marine or 3-Rax-Reaper all-ins. In addition, the unlikelihood of players travelling far to the right side of the map allowed for some hidden bases and proxied tech, which even trickled up to professional play. For late game, heavy air compositions were common due to the awkwardness of the North-South passages.