Ultralisk (Legacy of the Void) 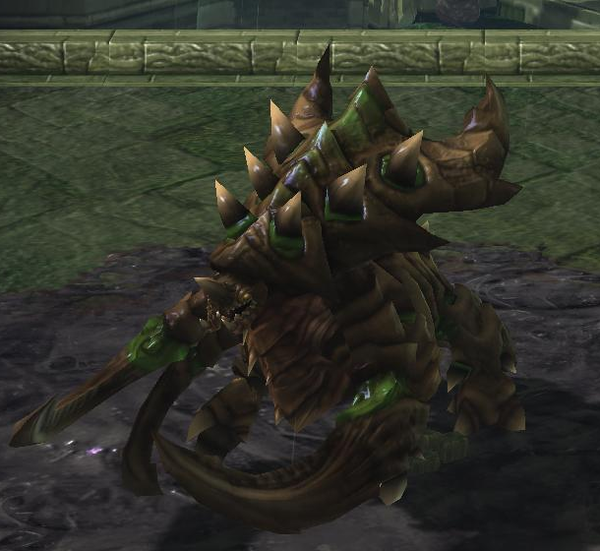 The Ultralisk is the Zerg's toughest late-game unit in StarCraft II. It can only be made once a Hive is researched and an Ultralisk Cavern is made. The Ultralisk has been upgraded since Brood War: principally, when attacking units (within a range of 1) its attack deals splash damage within a range of 2 in a 180° arc towards the target, albeit at a low 33% of normal damage. This improvement is paid for by the increase in overall cost, which places it around the same level as the Thor and Colossus.

Chitinous Plating is usually considered the more important upgrade as it massively decreases the damage that Ultralisks take from units such as Marines, Zealots, and Hydralisks. Once Anabolic Synthesis has been researched it is visible on all the player's Ultralisks when they move: a faint white trail appears behind their heads.

With Attack-Move taking priority over the regular Move command, it is recommended to control Ultralisks in a separate group from Zerglings and steer the latter "manually" for a brief period - preferably surrounding the opponent's army - until (most of) the Ultralisks have shouldered through the Zerglings and gotten in range of their targets.

Ultralisks can be extremely powerful against Protoss, but with a good composition of Archons, Immortals and Stalker/Zealot, a Protoss ground army can deal with Ultralisks. As Ultralisks are "massive" units, they can be used to crush force fields, weakening Protoss positioning in the late game.

If the Protoss has access to Stargate tech, Void Rays or Tempests are also recommended.

Ultralisks are useful against both Terran bio balls of Marine/Marauder and mech armies of Tanks and Thors. Since Terrans can usually produce Vikings quickly, Ultras are usually preferred over Broodlords as the go-to unit. When used in conjunction with the Infestor, Ultralisks with their cleave ability can demolish bio balls rooted by Fungal Growth. Ultras will often serve as the vanguard of a Zerg push, breaking siege lines and bio balls with their high armor and large health pool.

Ultralisks do particularly well versus bio balls composed of mostly marines, as 3/3 Marines only do 2 damage versus Ultralisks with Chitinous Plating. This means that if a bio player is suprised by an Ultralisk transition, the game can turn very awkward for them as their Marines will do practically no damage and they will have to produce higher tech units such as Marauders or Liberators to deal with the Ultrakisks before they are overwhelmed. It should be noted that a bio composition with a large number of Marauders can kite down Ultralisks effectively, but this also makes bio armies much more vulnerable to Zerglings and Hydralisks as they will have much lower DPS against unarmored units without Marines. The bio armies Medivacs will also become much more vulnerable to being snimed by Mutalisks or Corruptors as Marauders can't shoot up.

It must be noted, however, that bio armies including Ghosts using the Steady Targeting ability can be very cost-effective against Ultras, so rooting the bio force in place with Fungal Growth is recommended to gain favorable engagements.

Ultralisk use vs. Terran has changed since the Ultralisk damage buff and the introduction of Widow mines. Battles can turn either player's way quickly as a large number of units will die at once.

Ultralisks are good in late game, as the only true counter to them is Mutalisks or Broodlords. Though Roaches can kite Ultralisks, Fungal Growth allows Ultras to annihilate them while they themselves cannot be rooted by Fungal Growth. Hydralisks are effective versus Ultralisks without Chitinous Plating assuming no upgrades (or upgrades that cancel each other out). However, with Chitinous Plating, Ultralisks can beat Hydralisks. Yet again, as numbers get larger, Hydralisk effectiveness increases, since several layers of ranged units can attack, compared to one layer for melee units. Ultralisk splash effect helps to counteract this disadvantage somewhat, but it is often not enough.

While Lurker heavy styles are usually favored in a frontal engagement, Ultralisks mobility means that the Ultralisk player can often avoid such engagements and either look for a surround or split up and attack the Lurker player's expansions. Although Lurkers usually beat Ultralisks when in high numbers due to the Lurker's splash damage, Ultralisks destroy Lurkers when both are in low numbers.