For a catalogue of all race-specific upgrades available in multiplayer, see Protoss Upgrades, Terran Upgrades, and Zerg Upgrades.


Upgrades are in-game researches that improve the statistics or unlock abilities of units. This page describes the upgrades types to be found in Starcraft II, and how to use them. 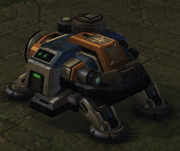 The Engineering Bay provides all Numerical Upgrades for Terran Infantry.

Numerical Upgrades are those upgrades that increase the attack and defense values of your units, increasing their combat efficiency. For all races, air and ground units are treated separately. Terran ground units are split into Mechanical & Biological. For Zerg, ground attack upgrades are split into Melee & Ranged. Protoss ground attack & armor upgrades apply to all ground units, and they have an upgrade to shields. In each category there are three levels. The second and third levels of most categories require an additional tech building. Only Zerg require a separate building for Levels 2 and 3, a Lair and Hive. Each upgrade costs as much Vespene as Minerals, and Attack and Armor for each unit type usually have an equal cost and research time.

These increase the damage dealt by all units of the class by a set number for each unit. The increases generally correspond to being [base damage/10, min 1] but this is not universal. These upgrades also affect the bonus damage of some units, for example the Immortal gains an additional 3 bonus damage against armored units per upgrade. Upgrades affect each attack, so if a unit attacks in volleys it will gain the bonus on each separate attack, rather than as a bulk addition to the whole attack. Note that attack upgrades do not apply to damage caused by abilities.

An example of an Attack Upgrade is:

Each Armor Upgrade increases the armor of a class of units by +1. For Terran and Zerg, these reduce all incoming damage. For Protoss units it only decreases the damage dealt to health points, not dealt to shields.

An example of an Armor Upgrade is:

These Protoss upgrades affect the armor of Protoss Shields, on both units and structures. By default the shield has 0 armor but with each upgrade it will increase by +1. Shield armor reduces all incoming damage until no shield health remains.

An example of a Shield Upgrade is:

Qualitative Upgrades, in most cases, affect how units function apart from their damage dealt and damage taken. This type of upgrade may still change a unit's statistics, for example, increasing a unit's speed, such as Metabolic Boost, range, such as Extended Thermal Lance, or starting energy such as Pathogen Glands. Some upgrades unlock abilities, as with Psionic Storm.

Broadly speaking, qualitative Upgrades are available at the building that enables the construction of a specific unit. For example, upgrades for the Zergling are at the Spawning Pool. Terran upgrades are also often available at a Tech Lab attached to the unit's production facility. As with Numeric Upgrades, sometimes an additional building is required to unlock all Qualitative Upgrades for a unit.

Apart from numerical upgrades, in the Campaign, most upgrades are unlocks purchased between missions, rather than researched in-game. Many additional upgrades are available in the single-player Campaign mode. They become available as you progress through the Campaign and gather 'Research Points' and the like. These choices do not affect multiplayer games.