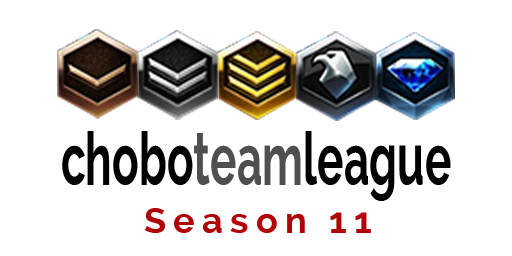 The Chobo Team League returns for its 11th season with 16 teams. From Season 10, Relentless Heroes left the league and Flare Bears split into its original two teams - Team Bearsloths and Flare Gaming, though Flare did not return for Season 11. Cosmic Cloud Militia, Amon's Rejects, and Born Gosu joined the league for their first seasons. The league will be run in two separate Group Stages for this season. The first Group Stage will consist of four groups of four teams, headed up by the top four teams from Season 10 with the other teams in each group picked by nomination. This first group stage will feature a three week round-robin. The top two teams from each group will form Group A for Group Stage 2 and the bottom two teams from each group will form a Group B for Group Stage 2.

Group Stage 2 will be run in a seven week round-robin format. The top four teams from Group A and the top two teams from Group B will move on to a single-elimination playoff. The top seeds from each group will receive a first round bye for this playoff.

The top individual performers through the regular season will play a showmatch for their respective groups. The top three players of Diamond, Platinum, and Gold divisions based on CTL Elo Rankings will represent the 9 players of each group.