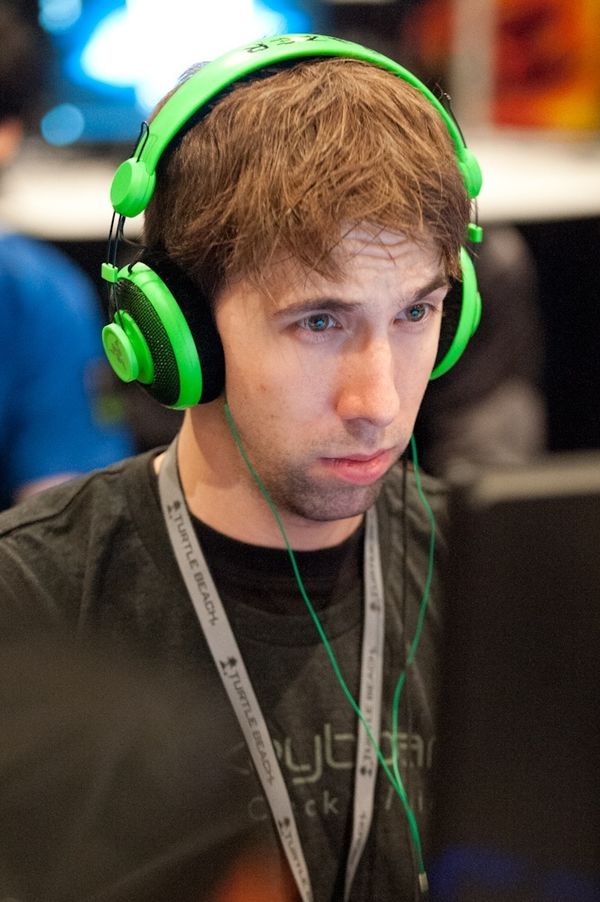 Dan "ViBE" Scherlong (born May 9, 1987) is an American Zerg player who is currently playing for ROOT Gaming.

ViBE was seeded into the first season of the IGN Proleague.

ViBE was part of Sixjax Gaming until the team disbanded on September 16, 2011. He subsequently joined It's Gosu eSports alongside his former team mate dde on September 22, 2011.[2]

On May 7, 2012, it was announced ViBe and It's Gosu eSports parted ways due to neither party being able to reach an agreement on ViBE's contract renewal.[3]

On May 16, 2012, ViBE joined the newly reformed ROOT Gaming. He was apparently scouted during the previous run of the ROOT gaming team but because of his contract with Sixjax Gaming, at the time, there was no way for ROOT to gain him as a member. Team captain CatZ cited the reasoning for him joining being that ViBE had a large unrealized potential and wanted to help him become "invincible".[4]

From June 8 to June 10, 2012, ViBE participated in the USA Blizzard World Championship Series tournament. He stormed through the Winner's Bracket taking out notables: IdrA and State. He progressed to the Winner Bracket finals where he dismantled lesser known Insur 2-0 before advancing to the overall finals. He faced daisuki (coming out of the losers' bracket) and beat him 2-0, earning him the right to represent the United States in the WCS North American Finals event. He won $12,000 for taking first place.

Despite already having qualified for the World Championship Finals, ViBE would still compete in the North America finals. He would progress through to the winners finals only dropping one game, to Goswser. Here he would face Scarlett, the WCS Canada champion, who would beat him 2:0. He would then face IdrA, whom he would beat 2:1 before facing Scarlett once more in the grand finals, again losing 2:0.

In the 2012 Battle.net World Championship, ViBE would be placed in a full Zerg group, alongside VortiX, Suppy and Comm. Despite defeating VortiX, he would lose to Suppy and then again in his rematch against VortiX, knocking him out of the tournament.

On July 14, 2012, ViBE participated in the IPL 5 North American Satellite Qualifiers. ViBE defeated marvel, Stillborn, State, and then went on to advance in to the finals to face Golden. In the finals, ViBE defeated Golden by a score of 2-1 and was able to take first place. His first-place finish qualified him for the IGN ProLeague Season 5. At the main event, he was defeated in the first round of the winner's bracket by TheStC, then in the third round of the loser's bracket by VortiX.

ViBE participated in the 2013 MLG Winter Championship invite-only tournament. In his Showdown match, he defeated Illusion to qualify for the main event. In the Round of 32, he was eliminated by Sen 3-1. In the consolation tournament, he defeated State 3-0 before losing to Bly 0-3.

ViBE was one of the 24 WCS America 2013 Season 1 Premier League invites.[5] However, he was unable to advance past the Round of 32, defeating teammate theognis but losing to TheStC and Snute to fall into Challenger League. Although he fell to Jim in the bracket stage, he was able to advance to Season 2 Premier League by topping his Challenger League group, defeating Bails and KiLLeR.

On July 20, 2013, ViBE participated in the 2013 MLG Summer Invite, an online tournament including solely American and Canadian players. He was defeated 2-0 by teammate puCK in the first round of the 16-player tournament.

In June 2016, ViBE rejoined ROOT Gaming for promotional reasons, noting that he was focusing on his stream and content creation, not trying to compete in the pro scene.[Citation needed]