Not to be confused with KT's Violet. 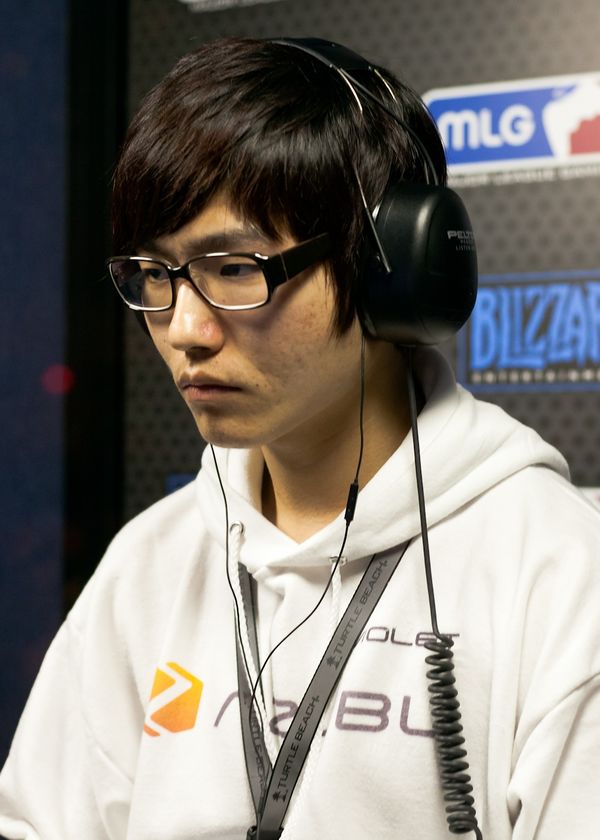 On August 1, 2012 it was announced via YouTube by Cyber Sports Network that viOLet would be sponsored by AZUBU and would be known as AZUBUviOLet.[5][6] The contract reached its end one year later, leaving viOLet teamless.[7]

On December 11, 2013, viOLet was recognized by the United States government as a professional athlete and was granted a P-1A visa.[8] He was the first StarCraft player ever to receive such a recognition.

viOLet was part of the original StarCraft II team announced by Dutch professional gaming team Serious Gaming. He was presented as part of the team, but not yet active as he still had Warcraft III tournaments to finish.[9]

viOLet qualified for GSL May where he made a run to the Round of 8 before being stopped by Mvp. This was enough to participate in the up/down matches where he bested Kyrix, 2-0 to be promoted to Code S.

In the GSL July Code S group stages, viOLet lost his first match to Ensnare on Bel'Shir Beach then defeated anypro to remain in Code S. However he lost the final match in a rematch against Ensnare and was not able to proceed onto the Round of 16. viOLet next set of Code S matches would be during GSL August. In the group stages, he lost to Bomber and Killer and would have to participate in the August Up and Down Matches. There, he placed last with a score of 1-3, therefore dropping down to Code A.

In GSL October Code A, viOLet lost 0-2 to HerO and ended up being knocked out of the GSL.

On June the 1st, 2012, viOLet was announced as one of the players invited to participate in GSL Season 3 Code S together with ThorZaIN based on his success outside of Korea.[10] In the first Group Stage, he beat Oz in the first match of Group G, lost to DongRaeGu in the winners' match, and beat Maru to advance second in the group after DongRaeGu. In the second Group Stage he lost to Seed, Mvp, and TaeJa, falling to Code A where he lost to MMA, qualifying for the Up & Down Matches for Season 4, which he forfeit; he has not participated in the regular GSL since.

As Runner-up at the IGN Pro League Season 5, viOLet qualified for the 2012 GSL Tour Grand Finals, where he was placed in Group B, along with Sniper, Life, Rain, and Seed, to be played on December the 18th.

On May 19, 2011, for the 2011 GSTL May, MVP sent out viOLet as their third player against SlayerS. The score was currently tied at 2-2 for both teams at that point. He wasn't able to take out SlayerS' Frozen and allowed SlayerS to take the lead at 3-2.

On June 23, 2011, for the 2011 GSTL Season 1 Group A, MVP sent out viOLet as their second player against SlayerS. The score was currently in favor for SlayerS at 1-0 at that point. He wasn't able to take out SlayerS' Alicia and allowed SlayerS to take the lead at 2-0.

viOLet represented Team AZK during IPL3. However, as he clarified on Twitter, he only represented that team for IPL and was never a member.[11]

On Nov 5, 2011, viOLet was announced to be a participant of the CSN Training Camp, which would allow fans to watch him practice for 2 weeks as he prepares for the Open Bracket at MLG Providence.[12] It was later announced that viOLet would remain in the US to continue practicing at the camp even after Providence.[12] His run in the 2011 MLG Providence Open Bracket was ended by his fellow South Korean progamer GanZi in round 3. viOLet nonetheless made his way through the losers bracket, and eventually earned a spot in the Championship Bracket, where he was immediately eliminated by MarineKing.

On December 21, 2011, viOLet participated in the ZOTAC Cup Monthly Final November. He successfully took down LaLuSh, roof, and then destroyed GoOdy with a score of 3-0 and grabbed 1st place.

viOLet's next attendance to a premier event took place in January 2012, in the HomeStory Cup IV. He narrowly reached the playoffs after finishing 2-1 in his group. In the playoff's, viOLet defeated MarineKing in the quarterfinals in a very close best of 5, and advanced to the semifinals. Both players disconnected in game 4, in which MarineKing was arguably winning, and both players decided to re-game. MarineKing would take the rematched game 4, with viOLet taking a convincing Game 5. In the following round, viOLet would face Sound, who would end up beating viOLet 3-2. In the bronze match, viOLet would face JYP and end up losing 1-3 to end up fourth overall.

On July 20, 2012, viOLet participated in the 2012 MLG Spring Arena. viOLet took down Alicia, Grubby, Leenock, and Polt to advance in to the final bracket. After taking down Stephano viOLet went on to face Symbol in the finals. viOLet was able to defeat Symbol by a score of 3-1 and took first place.

From February 8 to February 11, 2012, viOLet participated in the IEM Season VI Global Challenge Sao Paulo. The tournament started off with group stages. viOLet was placed in to Group C with ReaL, biGs, and Potiguar. ViOLet advanced out of his group with a score of 3-0 and headed in to the playoffs bracket. In the playoffs bracket, viOLet defeated DeMusliM and Ret in order to advance in to the finals. In the finals, viOlet faced SuperNova. After a set of great games, viOLet defeated SuperNova by a score of 3-1 and grabbed the championship.

On July 14, 2012, viOLet participated in the IPL 5 North American Satellite Qualifiers. viOLet received a BYE in round one and then went on to take down EroSennin and TriMaster, and then went on to advance in to the finals to face Caliber. In the finals, viOLet defeated Caliber by a score of 2-1 and was able to take first place. His first-place finish qualified him for the IGN ProLeague Season 5.

On December 2, 2012, viOLet competed in the IGN ProLeague Season 5. ViOLet's first opponent of the tournament was ToD, who he defeated 2-0. In the next round, viOLet went up against LucifroN, who he also defeated 2-0. Next, ViOLet faced Bogus(INnoVation), who he was able to defeat 2-1. ViOLet's next opponent was Snute, who he defeated 2-0. ViOLet's opponent in the fifth round was HerO. ViOLet once again won with a 2-1 score. In the next round, ViOLet's opponent was Symbol. ViOLet was able to defeat Symbol 2-0 and move on to the Winner's bracket final, where he faced Leenock. ViOLet was unable to defeat Leenock, losing 1-3. ViOLet then played against Polt, who he was able to defeat in a close 3-2 series. This victory allowed ViOLet to move on to the grand finals, where he would play a rematch against Leenock. Coming from the losers bracket, ViOLet had to win one best of five and one best of three to win the title. ViOLet was able to win the best of five with a 3-2 scoreline, but was unable to win the best of three, losing the series 1-2 and ending up finishing in second place.

On March 3, 2012, viOLet was invited to participate in the IPL Fight Club. His first opponent was HerO. viOLet defeated HerO by a score of 5-4 and took his rightful seat at top of the throne.

On March 19, 2012, viOLet faced his next opponent for the IPL Fight Club, TheStC. viOLet defeated TheStC by a score of 5-3 and remained at the top of the throne.

On April 3, 2012, viOLet faced his next opponent for the IPL Fight Club, MC. He lost to MC by a score of 1-5 and allowed MC to overthrow him.

Based on performance rankings,[13] viOLet was invited to participate in the NASL, where he was placed in Division 3, which began play on September the 14th, 2012. He was undefeated in group play, ending up with an 8-0 record, and advanced as group leader to the Round of 16 where he defeated Alicia 3-0, qualifying him for the offline Grand Finals. At the Finals, ViOLet defeated DeMusliM 3-2 in a close quarter final match and SortOf 4-1 in the semi finals. In the final ViOLet faced HerO. Despite being up 2-0, ViOLet ended up losing to HerO by a score of 2-4, taking second place.