Void Ray (Legacy of the Void)

This article covers the unit. For the Korean Protoss player, see VoidRay (Player).

This article covers the current multiplayer version of this unit. For other versions see Void Ray (Heart of the Swarm) and Void Ray (Wings of Liberty). 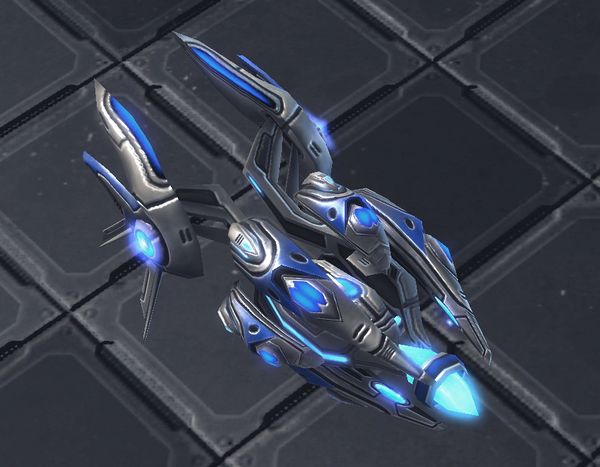 The Void Ray is an airborne siege cannon for the Protoss that is built at the Stargate. Unlike the Void Ray in Wings of Liberty, its attack does not charge up over time. Instead, Prismatic Alignment can be activated to increase damage to armored units and buildings for 14.3 seconds. When activated, it slows the Void Ray movement speed by 25%. Although it no longer deals additional damage to massive units, the Void Ray still excels against armored targets with high health.

Prismatic Alignment can be canceled before the 14.3 seconds are up to regain full speed earlier.

The bonus damage by Prismatic Alignment is not affected by the Air Weapons upgrades.

Due to their relatively low number of hit points, Void Rays have limited usefulness in the early game if anticipated by the enemy. Against Protoss, Stalkers can deal with Void Rays easily because of the ease of making large amount of Stalkers, unlike the time required to make Void Rays. Against Terran, sufficient numbers of Marines (especially with Stimpack), or properly controlled Vikings, can deal with Void Rays. Zerg players can build additional Queens until they are able to morph sufficient numbers of Hydralisks or Mutalisks.

In all these situations, Void Rays can still be used as a threat, forcing the production of anti-air units and keeping the opposing player inside of his or her base. If the player that is facing Void Rays is not aware of the incoming threat, he or she might be caught unprepared and thus there will be an opportunity to deal massive amount of damage.

Using Prismatic Alignment against non-armored units can scare an opponent into retreating, even though it does no extra damage.

A very good counter to Immortals and Colossi, since they are both armored and cannot attack back. Massing Void-Rays in this matchup is not ideal anymore as the primary army comp has shifted from a Colossus death-ball base to an Immortal Archon Charge Zealot base, and due to the tendency of the Void Ray to clump up heavily the splash damage of a few Archons can decimate an entire fleet. Massing purely Stalkers to counter Void-Rays only works against a very low count of the ships (usually in the scenario of early game attacks), however when there are equal numbers of Void-Rays to Stalkers the ships will win most of the time.

Is generally not used due to the standard composition of the Terran being very strong versus it, although versus an opponent that gets a lot of mechanical units like the Thor or the Tank, a few Void Rays can focus down the armored units very fast. One notable use came in the 2012 GSL Season 2 finals where Squirtle combined a Void Ray transition with his famous Archon Toilet to help combat Mvp's massive Battlecruiser fleet.

Void Rays are a useful counter to Terran Liberators, which only deal 5 damage against non-light air targets, but the Void Rays need to spread out before engaging them to avoid taking splash damage.

Another good use of the Void Ray is to make one or two of them to defend versus drops, since if a boosted Medivac passes right by a charged Void Ray it will barely get through with a very low amount of health, making the drop most likely to retreat, rather than continue while being so wounded. It is advisable to not make a Stargate just for the sake of Void Rays to defend drops, but if a Stargate has already been produced because of the opening, making a Void Ray or a few can be a good choice.

Can be used in conjunction with Tempest and High Templar. Void Rays are an essential part of the Golden Armada lategame due to their high DPS. Combined with Archons and Storms, they help keep Corruptors at bay defending Carriers and allow Tempests to do their damage unopposed. Due to the common use of Immortal Archon Zealot in the midgame a transition into a Skytoss lategame requires throwing away Immortals, which contribute nothing when fighting Zerg flyers making Void Rays necessary to replace the anti armor bonus lost by sacrificing Immortals.

Some players have also demonstrated that the Void Ray's massive DPS after activating Prismatic Alignment can be very useful in sniping key tech structure. sOs demonstrated that against a Roach centric mid game, six Void Rays can quickly snipe a Lair and the Mothership Core can use recall to bring them home, setting back the Zerg tech tree with virtually no losses.

The second usage of the Void Ray is in the early game against early Zerg cheese type attacks involving Roaches such as 19 Drone Roach Zergling. They are useful in this case as the absence of anti air is a weakness that can be exploited. The other is the low economy meaning the Zerg cannot spam enough roaches to ignore the voidray. Complemented with a tight wall-off to stop speedlings and it's a win.