Warp Gate (Legacy of the Void)

This article covers the current multiplayer version of this building. For another version see Warp Gate (Wings of Liberty and Heart of the Swarm). 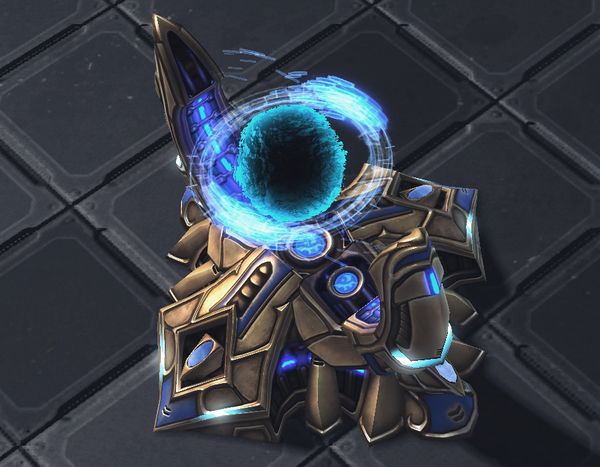 The Warp Gate is a unit producing structure for the Protoss, capable of warping in ground units. Warp Gates provide an ability unique to the Protoss: the rapid creation of units at any location on the map covered by the Psionic Matrix, so long as the location is not obscured by the fog of war. This allows for quick, on-demand deployment of troops at key strategic locations. Warp Gates are created by transforming a Gateway after Warp Gate Research has been completed at the Cybernetics Core. By default, this transformation is set to auto-cast. 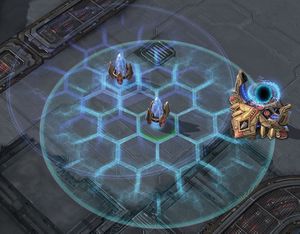 In the green Psionic Matrix, a warp-in will last shorter than in the classic blue one.

Any unit created by the Warp Gate has a typical warp-in time of 11.4 seconds (16 seconds at Normal speed). The warp-in process can be sped up to only 3.6 seconds (5 seconds at Normal speed) if the unit is in the Psionic Matrix of a Pylon which is close to a Nexus or a Warp Gate (a Gateway has no effect). This acceleration can disappear/appear mid warp-in, if the condition cited before disappear/appear (for example, a Pylon is destroyed/warped in, or a Gateway becomes a Warp Gate, or a Warp Gate becomes a Gateway).

All columns are in real-time seconds (at Faster speed). The "Chrono'd" column shows the cooldown time if the Chrono Boost spell is active on a Warp Gate throughout the entire cooldown period.

The ability to almost instantaneously produce units at specific locations on the map is a very potent capability for the Protoss, a capability utilized in almost all competitive games.

Rather than waiting for the unit to complete at the back end of the production cycle, Warp Gate allows the player to get the unit a short time after paying. Furthermore, Warp Gates are able to warp in units immediately once the seven-second conversion from a Gateway is complete (the cooldown timer is not activated). This means that not only is there no time penalty to switch to Warp Gate, but production is pushed ahead the 30–40 seconds that a unit would otherwise spend in the queue. The vast reduction in queue time, combined with the ability to deploy anywhere in Pylon or Warp Prism power, is a major bonus that makes Warp Gate research essential for every match-up.

The length of the Warp Gate cooldown period is, in all cases except Sentry, seven seconds shorter (three seconds for a Sentry) than the length of time required to produce the same unit at a conventional Gateway. This amounts to approximately a 15-35% increase in overall production compared to the Gateway, allowing maximum production with fewer Warp Gates. The saved money causes Warp Gate research to practically pay for itself.

It is useful to note that during the warp-in process, the unit warping in is vulnerable in two ways. First, enemy forces can directly attack the warping-in unit, suffering normal damage. During the warp-in period, the unit being created gradually gains health and shields, but if attacked before it is fully constructed, it will have less health and/or shields when it enters the battle. Another vulnerability is the loss of the Psionic Matrix during warp-in. If the Pylon or Warp Prism providing the power field is destroyed (or if the Warp Prism goes out of phasing mode) while a unit is warping in to that power field, then the unit warping in is instantly destroyed. The unit mineral and vespene costs are fully refunded to the player's resource pool, and the Warp Gate cooldown is reset. This can cause a disruption to the production cycles, but only a brief one if the player is attentive and immediately warps in to a safer location.

The Four Gate Rush (often written as 4-gate) is not used in competitive games anymore, but it is a common strategy in the lower leagues. Timing Warpgate Technology and the completion of four Warp Gates at the very earliest moments possible can allow the Protoss player to mount a very powerful rush. The number of Warp Gates (four) is considered the maximum number that can be used efficiently given the player's available resources at the early stage of the game.