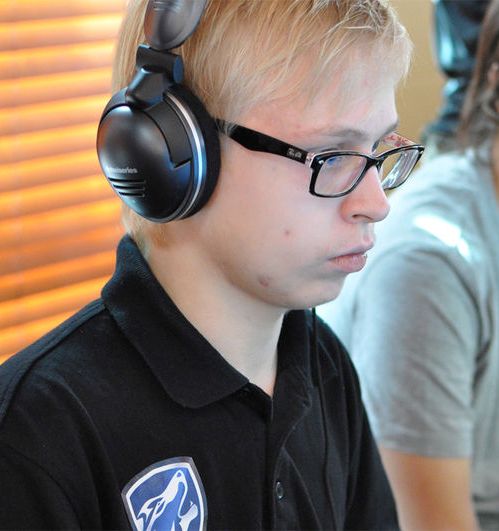 Vesa Hovinen is one of the best performing Finnish SC2 players, with many first-place finishes in different online tournaments as well as multiple top 3 finishes in Finnish StarCraft II events such as LANTREK'13. Welmu was ranked as #1 foreigner Protoss and #5 foreigner player in the January 9 rating list after his solid ZOTAC performances.[1]

Welmu started PC gaming at the age of 7. He started playing StarCraft: Brood War at a relatively young age. He never reached the professional level in Brood War, but he says that his experience in Brood War directly improved his gameplay in StarCraft II.[2] Welmu is currently studying in the university of Tampere. His performance is steadily improving and he hopes to win a big LAN event in 2013.[3]

Welmu stayed a bit low profile during the months following the release of the game. His first appearance in a major offline event occurred at SteelSeries StarCraft 2 Challenge. In this tournament, he wasn't able to reach the main bracket, being eliminated in the group stages.

In ASUS ROG Summer 2011 at Assembly, he managed to get a spot in the main bracket, advancing from his group over the favored Grubby and LaLuSh. He faced MorroW in round of 16 and was defeated 2-1. The next day, Welmu competed in World Cyber Games 2011 Qualifiers Finland. He came out of his group undefeated, and knocked Sein out in the first round of the bracket. He then faced Sein's little brother, Naama, who was heavily favored at that time. He won against the odds, and proceeded to the winner's bracket final, where he beat elfi, therefore earning him a spot in World Cyber Games 2011. He eventually defeated elfi again in the Grand Final.

In February 2012, Welmu participated in ASUS ROG Winter 2012 at Assembly. He surprisingly made it out of his group in second place, upsetting Kas and TitaN. However, his Round of 16 0-2 against Lucky knocked him out of the tournament.

In early March 2012, Welmu left Empire.[5][6] A few days later, Eclypsia announced Welmu as the second player in their roster.[7]

On 5 January 2013, Welmu is announced as being a part of Team NewRoSoft. One week later Welmu won a major Finnish LAN tournament, LANTREK'13 by defeating Naama in the finals by a score of 3-0.

On July 28, 2012, Welmu participated in the World Championship Series 2012 Finland. Welmu took down Serral, core, and imakki before losing to Naama and falling to the losers bracket. In the losers bracket, Welmu lost to elfi by a score of 0-2 and ended up taking 3rd place.

Before entering any major offline tournaments in Heart of the Swarm, Welmu was quite active in the ESL organized Go4SC2 Cups. Notably he was able to win the March Cup with wins over Nerchio, Blakq, Bly, and hOpe.

Welmu's first major offline Heart of the Swarm tournament was 2013 DreamHack Stockholm. He was able to advance first out of Group K in Group Stage 1, dropping only a single map to MorroW. In Group Stage 2 he was placed in Group A with GuMiho, Snuffle, and Bly. Unfortunately for him, he was knocked out as a three way tie for second between him, Bly, and Snuffle was broken by map score, and his 2-4 was lower than Snuffle's 3-4.

Welmu entered all 4 WCS Europe 2013 Season 1 Premier League Qualifiers from April 14 to April 18, 2013. He came very close, making it twice to the quarterfinals and once to the semifinals, but he was unable to qualify in the end. He was more successful in the Challenger League Qualifier as he made it through on Day 3 with wins over AcRo, JonnyREcco, Jogginghose, and Tarrantius.

In Season 1 Challenger League he was matched up against sLivko in the first round. He lost 2-0 and was sent down to the Group Stage. He was placed in Group H with MC, Nerchio, and DarkHydra. Although he lost the first match to MC, he was able to beat DarkHydra and Nerchio to qualify for Season 2 Premier League.

On May 15, 2013 Welmu participated in the M-House Cup 2 Qualifier #1. After walkover wins over Sting and Daisy he was able to beat Dayshi, Pro7ect, and Bly to win the qualifier and gain a spot in the Main Event. There he was placed in Group A along with ForGG, Feast, and Curious. After losing the first match to ForGG, he was able to come back with a win over Feast, but a loss to Curious in the final round would knock him out of the group and thus the tournament.

On July 9, 2013 Welmu played in Group E of the Round of 32 of the WCS EU Season 2 Premier League along with ThorZaIN, BabyKnight, and Ret. He was able to beat BabyKnight and then Ret in order to advance to the Round of 16. On August 6, 2013 Welmu advanced to the Round of 8 in the WCS EU Season 2 Premier League by beating both LucifroN and duckdeok 2-1. He was defeated in that round 3-0 by MC. He was still able to qualify for the Season Final by defeating HasuObs 3-1 in the Placement Matches.

On August 23, 2013 Welmu participated in the WCS 2013 Season 2 Finals in Cologne, Germany. He was placed in group A with Rain, Jaedong, and MC. He lost 2-1 to MC followed by a 2-1 defeat against Rain ending his run in the tournament.

In the break following WCS Season 2 finals, Welmu participated in online qualifiers including IEM New York Qualifiers and ATC Season 2 Qualifiers. In both events he was knocked out early on, although he did achieve a 4 kill in his teams match against the Copenhagen Wolves in the ATC qualifier before finally being stopped by Bunny.

After this break, Welmu participated in the WCS Season 2 Europe Premier League. In the Round of 32, he was placed in Group E, where he defeated BlinG and ThorZaIN to take first place and move on to the Round of 16. There, he was placed in Group A with TargA, StarDust, and Happy. Welmu won his first match against StarDust, but lost to TargA in the winners match, and then lost the rematch to StarDust to fall out of the group in third place. Welmu made only a brief appearance in the Challenger League, as he took a 2-1 victory over FireCake in the last round of the bracket stage to qualify for following season's Premier League.

In January 2015, Welmu qualified for WCS Season 1 Challenger. Then, in a close series, he defeated Beastyqt 3-2 to qualify for Premier League. On January 30, 2014, it was announced that Welmu was leaving NewRoSoft after two years.[8][9] A few months later, he joined Imaginary Gaming on April 20.[10]