Widow Mine (Legacy of the Void)

This article covers the current multiplayer version of this unit. For another version see Widow Mine (Heart of the Swarm). 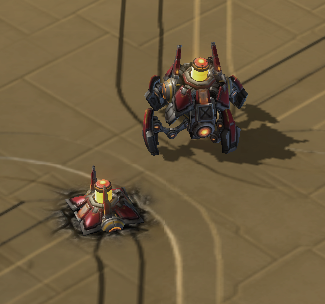 A Light Mechanical Mine produced from the Factory with a Reactor. Has no auto attack and must be Burrowed into the ground to use its "Activate Mine" ability to deal Splash damage to ground or air units. Deals fixed Spell damage (ignores both sides's Attack & Armor upgrades) to both the primary target and splash, then taking 29 seconds to load the next attack. Having a slight attack delay before casting "Activate Mine" makes this Unit vulnerable even to units like Mutalisks and Adepts (with a Detector) even if they have shorter range than the Mine's casting distance.

Widow Mines are not affected by the splash damage of friendly Widow Mines (be it the Widow Mine's own attack or another) but other friendly units are; the enemy can use fast units to drag the Mine attacks towards the Terran's army. Medivacs picking up units or the fast movement of Stimpacked units is enough to dodge the worst of the spell.

Commonly used as an anti-Melee unit against Zealots and Zerglings that Marines on their own may struggle with, until the opposing army has range 6+ units like Stalkers and Hydralisks with Detection to clean up, and then functions as rear guard unit against air to for Liberators or Siege Tanks, alongside Vikings or Missile Turrets. The Widow Mine's effectiveness at different stages of the game takes some experimentation and experience to understand properly.

1) A widow mine takes about 1.07 seconds to activate. Whenever a unit enters a mine's radius, the mine will lock on it indicated with a visible line. If the target lock is maintained for 1.07 seconds later, a Sentinel Missile will be launched at the target. If the unit successfully escapes the mine's radius before 1.07 seconds to elapse, the rocket will not be launched (the mine will not lose its cooldown) and only then will the mine be able to lock on a new target.

This can effectively lead to unnatural or seemingly random behavior where several units pass through a mine field without activating any of them. A fast unit can pass through a mine radius in less than 1 second, being targeted and not fired upon. Since the mine locks on to a new target only when the first gets out, the second target would be halfway through the mine radius when it is locked on, and yet again get out in less than 1 second.[1]

2) Two mines cannot automatically target the same unit. A field of mines can still end up with significant overkill due to splash damage. As a side effect, a high-HP unit will be able to pass through multiple mines and take very few hits[2]

3) The target of mines can be set manually (by right clicking), in which case they will all drop their current target and resetting their targeting to lock onto a new one, re-selecting the closest units. After 1.07 seconds, all the rockets will launch simultaneously, causing potential overkill. However, constantly right-clicking on units will cause the mines not to fire, since each right-click resets the 1.07 second arming time for all mines in range

4) A mine will never automatically target disguised Changelings or revealed Hallucinations.

Widow mines are a somewhat seldom seen unit in TvT. Since Raven openings are so common, and all Terran combat units are ranged, they will find little success against traditional Marine/Siege Tank armies. Due to Tanks being such an important factor in ground engagements, and factory production being so paramount as a result, Mines are made rarely in the matchup.

Although not typically used in the main army composition, there are a few ways that Widow Mines still do see some use. One way is through a Mine Drop opener: a few Widow Mines can be dropped in enemy mineral lines to harass workers in the early game. Hellions are a more common choice for the volatile early game, but mines can be an option to punish Hellion/Reaper pokes and posture for the drop. Detection is scant in the very beginning of the game, so there is a window to use Mines and take the risk in the hope of gaining an economic advantage.

Another scenario which may see Widow Mine usage is for a Mech player, as a Hellion/Hellbat alternative from Reactored Factories. Though weak in frontal engagements, they can help secure a defensive position, especially vs a Bio player sending heavy harass or another Mech player sending out sizable groups of Hellions. Placing Mines throughout the map can offer map vision as well as harry reinforcement routes, which may go unnoticed by an inattentive player. If a Bio player opts for air control and loses/cuts Ravens, the Mine player may be able to get good connections on clumped Vikings, though this should not be counted on, especially as Scans are an option to get vision of opposing armies.