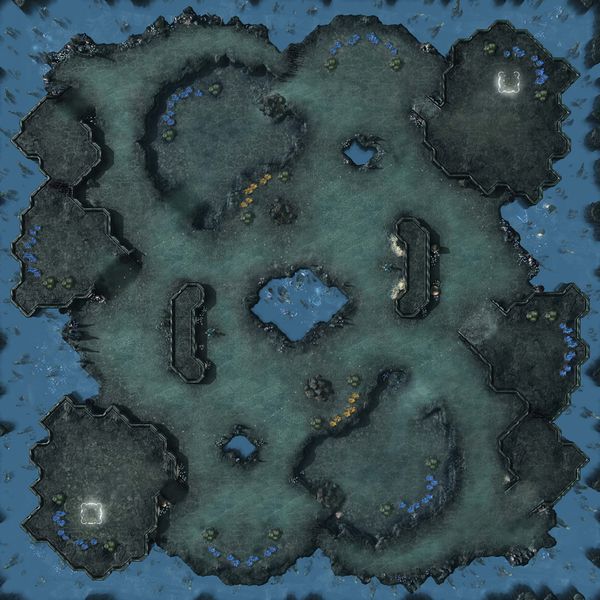 Xel'Naga Caverns is a two-player map added to the Blizzard ladder at the start of Season One.

The natural expansion is vulnerable to attacks. Further expansions are even more difficult to defend. Use of the Xel'Naga towers provides vision over a large portion of the battlefield.

The mains are in the bottom left and top right of the map and have a ramp down to the Natural. The Natural has one divided entrance to the middle of the map, and one entrance at the border of the map. This back-door entrance is covered with bushes and can, for example, be used for Harassment by Zerglings or Hellions, but can also be walled off with Pylons or Supply depots. Behind the Rocks of the Natural is another expansion on the Lower Ground with one bigger ramp. In the middle of the map are two Xel'Naga Towers and two gold expansions that are barred by rocks. The center features a relatively huge area that can only be reached with air units. Another expansion is at the center left or center right position. The ramps leading to this expos are facing the main on whose side they are. Their other exits lead to the back-door entrance of the Natural.

Another map with a wide open-natural, Xel'Naga Cavern also has an obstructed central position. Xel'Naga towers flank this, and a gold base is within throwing distance of that. On the other side of this base, two chokepoints are split by a small hole in the map leading into the natural and main ramp. Line of sight blockers beside the natural lead to a high ground behind the fourth mineral line and leading to yet another base. This was considered a big map at the time, though it seems small now in comparison.

There are usually 3 choices for your third. A. The Gold, which is closer to your opponent. B. the expo behind the rocks and C. the Expo on the right, or left side which has the ramp facing your main.

Protoss will either take the Gold or expo B. If they take the Gold, they will leave the Rocks leading to the other Expo unharmed. So there is only the one flank Possibility behind the Bushes. This area can be walled off with Pylons. Having the main army in the middle of the map, the opponent bases are pressured more. If they take the Expo behind the Rocks, they will destroy the rocks. The mineral line is a bit more vulnerable to drops, because of the High Ground behind it and Protoss will have 2 entrances to defend. The one to the natural and the one to the 3rd. Protoss often build some Cannons at the Third.

Terran almost always takes the Gold as a third and turn the Command Center into a Planetary Fortress. Thus, the expansion is very safe, the opponent will try to avoid the range of the PT. From this very strong Position the Terran can do a slow tank push, or Poke with MMM.

Zerg may have a hard time defending the Gold, because of the use of the Xel'Naga Tower with siege tank, supported with a PT in the back, or Protoss Colossus pressure. There are possible flanks, but a nice arc of Zerg is hard, if pressured by a slow push to the Gold. If they expo at C, both expos have a close air distance to the main, so drops will usually go for the expos and not the main, and if, they will be spotted early. The B expo is furthest away from the opponent. Enemy armies will have a harder time retreating, when they attack, and the army is out of Position, so counterattacks are effective.

Often early proxy buildings are placed behind the enemy bushes. However, some people scout this entrance with their first worker, or even a bit later. Other common positions are every place outside the vision of the Xel'Naga Towers, especially the expansions behind the rocks. Those proxies are often Tech buildings like a Starport or a Dark Shrine, mostly for harassment purposes. If Protoss pushes early, they will proxy a Pylon for reinforcements, often behind the mineral line of the Gold. Also if Protoss builds a Pylon on the low ground behind the main, they will try to get vision of the high ground with air units (Void Ray or Observer) and warp in units on the high ground. This is really effective against an opponent with a small army, who is either teching or gearing up to expand and protects the ramp with forcefields or bunkers.