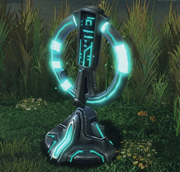 The Xel'Naga Tower (Also known as the Xel'Naga Watch Tower, Watch Tower or Observatory) is an indestructible neutral structure that reveals an area of radius 22 around it when activated by a unit.

Xel'Naga Towers are usually placed in strategic locations of the map to provide advantages for the controlling player. They can cover base entrances (as in Shattered Temple), areas with high traffic ( as in Scrap Station and Xel'Naga Caverns), and important expansions (as in Backwater Gulch).