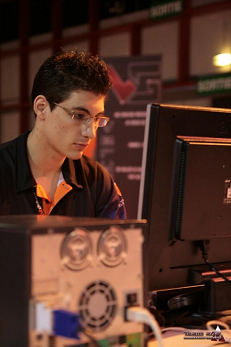 He is working as a commentator for O'Gaming TV and is one of the most appreciated French commentators and one of the best as a player, frequently being one of the 200 Grand Masters of the European server.

Before playing Zerg in StarCraft II, Yogo used to play undead in Warcraft III, but he has also good knowledge about StarCraft: Broodwar. After showing good results in offline events, he was declared "best player of Maine-et-Loire" since he lives in Angers. During his Warcraft III career, he was already member of Millenium, and stayed in the team after the transition to StarCraft II. YoGo is strongly against playing other games than RTS.

He was one of the first casters of the Millenium TV with Llewellys, BoBleGob and TheBest. Working there since more than two years, he casted weekly events such as Go4SC2. He was one of the first persons in the French community to release video guides about basic StarCraft II strategies, mechanics and micro-management. Later he created his now well-known WebTv show : DrYoGo. He self-proclaimed "doctor" and each Friday pre-evening he explains strategies used by progamers, makes analyses and organizes some showmatches between TV viewers. He also organizes and casts showmatches, usually opposing a member of Millenium to another progamer. He also often streams his ladder live on the O'Gaming TV.

Yogo managed to get in Grand Master league during the 2013 HotS season 2, with a 33-17 map score at this time.

YoGo is known for his mutalisk-play. At a time, he used to play with mutas in every match-up, in every single game. He explained that his love for the mutalisks came from his Warcraft III career, where he used to play a lot with Gargoyles, loving the speed and mobility of the unit. He started using more strategies when making tutorials for StarCraft II beginners. While playing exclusively Zerg at the beginning, he started to play Protoss and Terran, in order to increase his knowledge of the game. He eventually reached master’s league with all 3 races.

Despite his weird playstyle, he reached the Grand Master League many times. He was Grandmaster almost the whole Season 1. When he failed to reach Grandmaster's league, he usually maintained himself at a top master rank.

Since he has a very good knowledge about StarCraft II and other Blizzard's RTS, YoGo's casts are technical. He tries to explain what the players are doing during the matches, but his stream is also a show to not be too boring.

All his casts are in French.