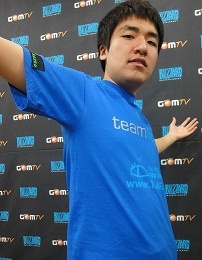 Zenio is a competitive StarCraft II and former Warcraft III player from South Korea. Despite only having a minor presence on the WC3 scene, Zenio was part of the well-known team WeRRa before joining Old Generations. It was announced on October 28, 2011 that Zenio would be leaving oGs since there was a dispute about living in the team house.[1]

He was speculated to be a new addition to Team Liquid's roster, as presented by the player outline in the respective image. Zenio was confirmed to be Liquid's new member as of November 21, 2011.[2]

Zenio was one of the earliest examples of the top South Korean talent. Before players like Cool and Tester were regular names on non-Korean forums,[3] Zenio (as ZenioWERRA) was dominating the mostly WC3-based SC2 scene in Korea. As a result of his success, Zenio was featured in the PlayXP Invitational, where he overcame compatriot and fellow WC3 Orc, WhO.

Zenio qualified for all three seasons of the 2010 GSL. His highest finish was the Ro8 in GSL 2, where he defeated IdrA in the Ro16 with a score of 2-0. Game 1 against Idra on Delta Quadrant gained him some notoriety, in which he used multiple Overseers to repeatedly contaminate IdrA's hatcheries. After his victory, his ceremonial hand gesture to IdrA became a point of controversy (see below). Due to this relatively strong performance, his loss in the following season in the Round of 64 was considered an upset. Zenio was also one of the invitees to the GOM TV All-Stars Invitational 2010 where he lost 1-2 to MarineKing. In 2011, Zenio was one of the South Korean invites to the first season of NASL.

Zenio's highest finish was in the first Code S season in GSL January where he made the Round of 16 after defeating FruitDealer and jookTo. He has since been a borderline Code S player with a winless record in the group stages of the proceeding March and May seasons. His only victories in that time period have been from eliminating BoxeR and Jinro in the up/down matches, to preserve his Code S status. Zenio finally advanced out of the group stage in the GSL August tournament, but got knocked out of the round of 16 by TOP, losing 1-2. In GSL October, Zenio was knocked out of his group 0-2, therefore dropping to the Up and Down Matches.

In the October Up and Down Matches, he went 0-4 in his group (consisting of Genius, GuMiho, Puzzle, and Sage) and dropped down to Code A for GSL November.

Zenio played in Code A for the first time in GSL November, facing Mujuk in the round of 48 and beating him with a convincing 2-0. He was then knocked out in the round of 32 by MarineKing. As he made in the round of 32 he gained a spot for the 2012 GSL Season 1 Up and Down Matches, where he lost to Polt, but managed to beat Virus, LosirA, and InCa to make it back to Code S.

Zenio was back in the 2012 GSL Season 1 Code A, due to placing 3rd in his Code S group. He defeated BBoongBBoong in the second round and sC in the third round to get back to Code S .

Due to placing 3rd in his group, Zenio was seeded in the Round of 32 of the 2012 GSL Season 2 Code A. His first opponent was Bomber, he lost 0-2 and will have to try to qualify for Code S through the Up and Down matches.

As one of the South Korean invited players, Zenio participated to IEM Season VI Kiev. He was seeded in Group B. He first beat Grubby 2-0 before losing to Kas 0-2. His final opponent to be able to qualify for the playoffs was NightEnD. He won 2-1, but due to lag in a very important engagement, the series was extended to a best of 5 starting at 2-1 for Zenio. He was able to beat NightEnD 3-2 and thus advanced to the playoffs. His next opponent was NaNiwa in the quarterfinals, whom he beat 3-1. His opponent in the semifinals was MMA. He got eliminated 0-3. He then faced Kas again for the bronze final. He lost 2-3, finishing 4th overall.

Due to finishing 4th at IEM Season VI Kiev, Zenio qualified for IEM Season VI World Championship. He finished 3rd in his group, respectively behind PuMa and Killer, and advanced to the Round of 16. There, he met his former teammate SuperNova and took the victory 3-1. His next opponent was MMA, who repeated the same performance as in Kiev and eliminated Zenio 0-3. Zenio finished 5th-8th overall.

On November 22, 2012 Zenio participated in IEM Season VII - Singapore. Winning his way through the open bracket he managed to qualify for the group stages. He took second place going 4-1 (9-2 on maps) and thus made it into the playoffs. Defeating HasuObs 3:0 in the round of 12, he was then knocked out of the tournament by sLivko, losing 3:1.

On the opening series of the IPL TAC 3, in the series between Team Liquid and Dignitas, Zenio all-killed Dignitas winning five consecutive sets in a best of nine series.[4] Due to his incredible feat, Team Liquid celebrated by releasing a Zenio themed wallpaper titled "The Legend of Zenio." [5]

Zenio's rivalry with IdrA started with some conflict on the ladder. After a game in GSL Season 2 against IdrA, Zenio made a chopping motion with his hand as a ceremony, inciting controversy. They met again in the NASL Season 1, with Zenio taking IdrA down 2-0 in the group stages and again in the playoffs. During the NASL playoff series with Zenio, IdrA left the first match without typing out "gg". At the start of the second game, Zenio asked Idra "where was gg?", to which IdrA responded "earn it."

Zenio later stated in the NASL post-qualification interview that "I don’t hate him, I just think he needs to change his attitude."[6] His opinion of IdrA was similar in his interview after joining Liquid, calling him a "fun player" and that he would like to play against him when he had returned to Korea. He did admit, however that the speculations of their mutual distaste was most likely due to his victory ceremony in the GSL.[7]

It's worth noting that as far as rivalries go this one is extremely one-sided with Zenio winning every set they played against each other.