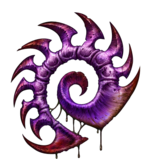 The Zerg are a race entirely unlike the Terrans or the Protoss. They are composed of many different species integrated into the Swarm via Zerg infestation. These creatures are rapidly and selectively evolved into deadly and efficient killers to further the driving Zerg imperative of achieving absolute domination. The Zerg make no use of technology to create their weapons, armor, or starships. Instead, these functions are efficiently fulfilled through biological adaptation and planned mutation of the Zerg strains. Even Zerg buildings are in fact specialized organs within the living, growing organism of a Zerg nest.

When the Zerg first arrived in the Koprulu sector, they were unified by their absolute obedience to the Zerg collective sentience known as the Overmind. The Overmind ultimately directed the actions of every Zerg creature in the Swarm, functioning through a hierarchy of lesser sentiences. The first and most important tier of these consisted of the Cerebrates, each entrusted with direct control of a sizable section of the Swarm. The cerebrates' commands were disseminated in turn by the Overlords, which directly ordered and controlled the mass of Zerg creatures both in their nests and on the battlefield.

Although the Overmind was primarily driven by its desire to consume and assimilate the advanced Protoss race, it found useful but undeveloped material in humanity. Taking a powerful psionic Terran, Sarah Kerrigan, the Overmind evolved a new and unique creature: the Queen of Blades. When the Protoss destroyed the Overmind during the invasion of Aiur, the Queen of Blades manipulated the Dark Templar into eliminating the surviving cerebrates. As a result, she came to dominate the Swarm.