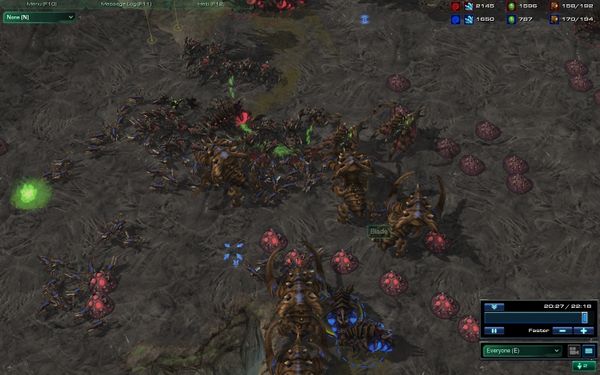 The Spaghetti Zerg Build is designed around using the low cost of Zerglings to your advantage by banking gas for Infestors, upgrades and eventually Ultralisks while still applying pressure and defending your bases. The upgraded Zerglings offer mobility and can deny the third of your opponent, while Infestors help you arrive safely at Hive Tech vs. Roaches, Mutalisks, and Banelings. Ultralisks are very strong vs. both Infestors and Roaches and are a great compliment to a Zergling Infestor army as Fungal Growth will keep the roaches from Kiting your Ultras and Zerglings.

This is a defensive build which aims at reaching Hive Tech safely with mass Zerglings, Infestors and Ultralisks with superior upgrades.

The build is a rough outline and modifications should be made depending on what your opponent is producing. As always Overlord positoning and Zergling scouting is important to avoid droning blindly versus an all-in strategy.

Use defensive Banelings and one to two Spine Crawlers to hold, be sure to scout their gas and prepare as needed.

Use spinecrawlers and maximize surface (preferably a complete surrond) area for your Zerglings in order to beat a +1 roach attack. If he adds Zerglings build banelings of your own to counter them.

Use Spine Crawlers and Banelings of your own to kill his Banelings, then engage with your Zerglings, getting the best surround you can to kill the remaining roaches. Micro your Zerglings by splitting to ensure that you don't lose all of your Zerglings to a few Banelings.

Early upgrades help the lings harras the Mutalisk player by killing an early third, drones, queens and take pressure off until sporecrawlers are finished and Infestors pop out.

Build 3-4 safety spores and additional queens if the opponent is committing heavily to Mutalisks.

Open areas with opportunities for surrounding, flanking and good counter attack paths are excellent for Zergling harassment. Remember that a larger map favors your faster Zerglings and makes it easy to see a push coming and prepare on time.

Maps where Brood Lords are not viable because of the wide, open spaces and lack of cliffs or high ground usually favor Zergling Infestor Ultralisk, because of how easy it is to flank your opponent with Zerglings and Ultralisks and come in for large surrounds.