Zergling (Legacy of the Void) 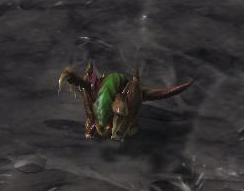 The Zergling is a small and fast melee attacker and the backbone of the Zerg army. Individual Zerglings are weak, but large groups can surround and terrorize enemy ground forces. In such groups, they soak a lot of incoming damage and provide a shield for more expensive units.

Zerglings are Tier 1 units and can be spawned early. They require only a Spawning Pool. Zergling rushes are an infamous early threat for which opponents must prepare.

Two Zerglings hatch from a single Cocoon, and each Zergling only uses one-half of a supply point. Once a Baneling Nest has been constructed, Zerglings can morph to Banelings at any time.

Metabolic Boost (researched at the Spawning Pool) affords Zerglings the fastest ground movement speed in the game, and the second-fastest movement speed, period (Interceptors are faster).

When Metabolic Boost finishes, all of the player's Zerglings sprout wings. Once the upgrade is complete, the unit is typically referred to as a "Speedling" in the community.

Zerglings are produced in every Zerg match-up. If not used as part of an early rush or defense against early pressure, Zerglings are sent out across the map as scouts and early harassment. Later, Zerglings can force engagements by surrounding and trapping enemy units. They are also effective for counter-attackers, as they can be rushed into an opponent's base and deal heavy damage before the enemy can recall his forces or produce new units.

The Metabolic Boost upgrade is considered essential in nearly all strategies, and it is often researched as early as possible. It is critical for effective use of Zerglings: Zerglings attack by surrounding their victims, body-blocking them into place, and tearing them to shreds. Obviously, this is more effective if the Zerglings can catch said victims. Further, it affords them the mobility for which they are known, making them effective scouts, rushers, sneak attackers, etc.

The Adrenal Glands upgrade is usually researched when Zerg reaches Hive if the Zerg has melee upgrades. Zerg players research it if they rely on counter-attacks to delay pushes and damage economy.

Zerglings don't scale well against Zealots, because as soon as Zealots get the +1 attack upgrade, they can kill Zerglings in two hits (however, this can be offset with the +1 armor upgrade for Zerglings - which can be offset by the +2 attack for Zealots, and so on and so forth). As such, players seldom mass Zerglings early. However, against a Protoss rushing Immortals, or using a Stalker-centric build, Zerglings are the perfect counter unit. They can surround Immortals and Stalkers to deal heavy damage. Barrier affords Immortals brief protection, but it doesn't last. Later, Zerglings can do run-bys against enemy bases. Protoss units are quite slow and may not reach their base in time to save it. Fully upgraded Zerglings deal high damage in the late game since they are cheap, spawn fast, and use minimal supply.

Zerglings are very effective in ZvT. With their improved AI, they can easily surround their targets. In the early game, Zerglings match up well against Marines and Marauders. When combined with Banelings, Zerglings provide good cover by outrunning and surrounding the Marines and Marauders. This gives the Banelings the chance to reach and devastate the Terran forces. Zerglings remain effective through the match-up, but if the Terran player uses Hellions or Hellbats, heavy use of Zerglings should be avoided because they melt to the area-of-effect flame attacks. Zerglings fare well against Mech play, because immobile Mech armies struggle with counter-attacks.

Zerglings are useful against Zerg for very early aggression, and they can punish an early-expanding Zerg. With the Metabolic Boost upgrade they can easily run past Roaches and kill off Drones or snipe isolated Queens. Zerglings are less effective toward the midgame as Roaches come into play. Roaches have a lot of armor and at +1 attack they can kill Zerglings in two shots. As Roach numbers grow, the surface area of the army decreases, which renders swarms of Zerglings less efficient when surrounding a ball of roaches. However, because of the Zergling's high speed, they offer faster map control and scouting than Roaches. 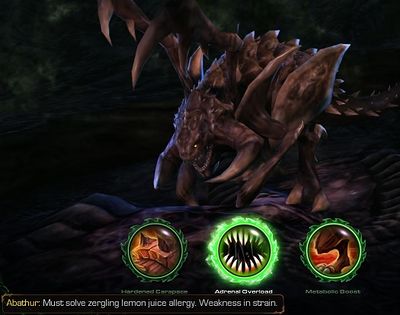