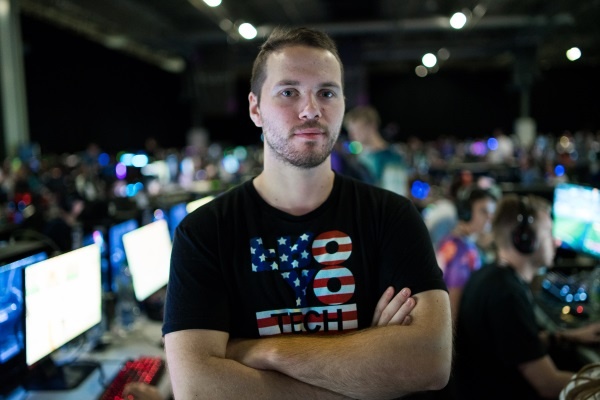 He is regarded as the most successful player to have played the game due to his ability to play any team role at a world class level. He has won a total of 19 ESEA Invite titles and has won 3 installments of the Insomnia LAN series at i52, i55 and i63 respectively as well as winning the Rewind 2017 and Rewind II World Championship tournaments.

Grant first started playing FPS games at the age of 9, regularly playing Serious Sam and Unreal Tournament before investing a large amount of time into the Call of Duty series during his time at middle-school (about 10 hours a day[1]). Eventually he quit the series altogether before pre-ordering the Orange Box where he first got the chance to play TF2 and loved the game saying it was "fun and interesting...[2]".

b4nny made his ESEA debut in Season 3 Open with Slaughterhouse Gaming which was built around a Public-server community. However he had a relatively limited showing on Demoman, only playing 3 matches. The team itself finished 7th in the Regular Season but lost in the first round of playoffs to Harmonic[3]. Season 4 proved to be better as a whole, b4nny now a regular player on the roster managed to help the team achieve a 3rd place overall finish in Season 4 Open, eventually losing to Detox TF2 in the Lower-Bracket finals[4].

Shortly after Season 4 was over b4nny was approached by fellow Open player enoryt in regards to forming a new team with the goal to win Season 5 Open. Eventually a full roster was made with jnkx and blaze on Scout, enoryt and Mackey on Soldier, b4nny on Demoman and karenbear on Medic. The team proved to be a dominant force in Open, going 15-1 in the Regular Season on course to win the division altogether, beating Vires TF2 in the Grand Final[5] (a team which included future rivals Harbleu and Platinum) and seal Grant's first ever ESEA Championship. After a roster reshuffle which included bringing in a new Scout combo in the form of Yz50 and raf and replacing karenbear with experienced Invite player shade. b4nny was now ready for his Invite debut as a part of the now sponsored eMazing Gaming team.

In ESEA Season 6 Invite the team had a respectable debut, finishing the Regular Season in 3rd place with a 10-6 record which would qualify them for the LAN finals in Dallas (Grant's first ever LAN event). Despite going into the Finals as the 3rd seeds the team had a lacklustre showing, finishing 4th overall after a tight 2-1 game to Blight.own. Next season proved to be far better for the team, after switching out raf for Ggglygy the team finished 3rd in the Regular Season for the second time in a row with a 12-4 record but coasted their way to their first ever Invite title without dropping a single map in the playoffs eventually beating compLexity Gaming in the Grand Final. Another 3rd Regular Season finish soon followed in Season 8 but the team eventually finished runners-up to CheckSix Gaming in the LAN finals. After this the roster was shuffled again, Ggglygy, Yz50 and Shade were out and subsequently replaced by cyzer, Clockwork and Reptile. Shortly after finishing the Season 9 Regular Season with a 15-1 record, making them the 1st seeds for the LAN finals, eMazing Gaming dropped the team. The roster now playing as Prophets subsequently won the finals, earning their second Invite title as a team all without losing a single map yet again while beating the newly formed Classic Mixup in the Grand Final.

Prophets were picked up by American Organisation Quantic Gaming for Season 10 of ESEA-Invite with Reptile ousted from Medic in favour of CB, another 15-1 Regular Season looked to put them on course for back-to-back championships. But in a huge upset they were beaten in the Grand Final by Mixup, who managed to win two best-of-three series while coming from the Losers-Bracket to secure their first Invite Championship instead. After this the deck of Quantic was shuffled yet again, with long time player Mackey out in favour of Dave__AC on Soldier and Shade returning to the roster on Medic for the first time since Season 8. The changes seemed to work however despite a lacklustre 4th in the Regular Season, after which the team was signed by another Organisation in the form of Leviathan Gaming in time for the LAN finals.

After the name change, Leviathan would subsequently win the Season 11 Finals, beating perennial rivals Mixup once again to take a third Invite title. Changes were subsequently made again to the team in order to prepare for the upcoming i46 LAN which was to be the first ever Intercontinental TF2 tournament of its kind with Mackey attending in the stead of Dave__AC. Both of the American representatives (Leviathan Gaming and Mixup) dominated the European competition with both teams booking their place in the Grand Finals, Leviathan Gaming eventually lost to Mixup in a tight best-of-three series. After this clockwork moved to The Spacewhales and was replaced by hero. However Season 12 was all in favour of Mixup, a 16-0 perfect Regular Season record was followed by a dominant LAN showing in Dallas, Leviathan Gaming finished 2nd to Mixup after being trounced in the Grand Finals (5-0, 5-1 in favour of Mixup). Shortly after this the team disbanded allegedly due to a lack of dedication on the part of enoryt[6] with b4nny wanting a team that was fully committed to win. One of the longest pairings in ESEA-Invite was over as b4nny aspired to achieve more.

b4nny set about to create a new team based around him which would become known as bp (later to be sponsored by High Rollers Gaming). cyzer and Shade stayed on from the previous Leviathan Gaming team with new players Shrugger, Tagg and Lansky filling up the rest of the roster. With Season 13 having the fruitful bonus of receiving a Community Fundraiser to help the winning team travel to the upcoming i49 LAN[7], b4nny and HRG proved their intentions with a 16-0 regular season record and coasted to the Championship, winning the LAN finals without dropping a Single map. Season 14 was a similar story with yet another 16-0 Regular Season on their way to back-to-back Invite titles (b4nnys fifth title overall). This dominance didn't convert over to i49 however, eventually finishing 3rd overall with a loss to European team TCM-Gaming in the Lower-Bracket finals.

Shortly after i49, cyzer, Tagg and Shade left HRG for various reasons, leaving b4nny to rebuild the roster and form new team iT for Season 15. b4nny would make his Scout debut pairing up with shrugger and also bring in rr, Xalox and Indust to fill the gaps. Yet another 16-0 Regular Season record followed, but in echoes of Season 10, Mixup once again beat Grant's team in two best-of-three's coming from the losers bracket to win the Championship.

After missing out on the Season 15 crown, b4nny was approached by former Medic Shade with the proposition of forming a North American "superteam" to attend and win the upcoming i52 LAN. b4nny and clockwork would Scout, blaze would Roam with Lansky (initially Ruwin but was switched due to differing playstyles[8]) on Pocket, dummy would Demo and Shade would return to Medic once again. Results immediately showed with wins in CEVO Season 4 Main and yet another 16-0 record in ESEA Season 16 Invite on course to the teams first Invite Championship under the froyotech name. Despite this dummy couldn't commit to the I-Series event and was swapped out for duwatna from Street Hoops eSports. Thus would begin what is arguably the most dominant roster in TF2 history, all spearheaded by b4nny. froyotech won i52 with a convincing defeat of European powerhouse Epsilon eSports in the Grand Final. Further wins would follow suit including the CEVO Season 5 Pro Finals, the GXL Invitational 2014, two further ESEA-Invite titles in Season's 17 and 18. After Lansky retired he was swapped out for another ex-Street Hoops player in the form of Ash with b4nny himself switching to Pocket Soldier. The teams dominance continued despite this change with a fourth consecutive Invite title in Season 19 and froyo would go on to be the first ever back-to-back American I-Series event winners, defeating nerdRage in the Grand Final of i55. On January 19th 2021, b4nny announced to his Twitter followers about a froyotech roster change, where b4nny would go on to play Pocket Soldier, from Pocket Scout.

During the Season 20 playoff match between froyotech and Team SoloUber, newest pickup Ash left the team mid-game over internal issues [9] and the team subsequently lost the series, finishing in 3rd overall for the Season (the first time b4nny had finished 3rd in Invite). Reportedly after the game b4nny asked the remaining players one by one if they wanted to stay on for next Season, which subsequently left him and clockwork as the only one willing to commit[10]. Grant subsequently reformed froyotech, cherry picking numerous Invite players including decimate (who retired before the season started), corsa, Freestate, Paddie, Muma and Ninjanick. Despite all the changes the team immediately returned to their winning ways, winning Season 21 and defeating reigning champions RONIN with a lower-bracket sweep. In order to prepare for i58, long time rival Soldier TLR joined along with phorofor, securing back-to-back Invite titles once again in Season 22, defeating RONIN yet again. But at i58 the team finished a disappointing 3rd which prompted more roster changes. blaze and Shade returned to the roster with promising Demoman Habib replacing Muma. With numerous roster changes between seasons, b4nny and froyotech won an extra eight straight ESEA-Invite titles, two Rewind events (the Rewind 2017 Invitational and Rewind II), Insomnia 63 and five straight RGL Traditional Sixes titles. Cementing froyotech as the best team in the world and b4nny as the most successful player in the history of the game.