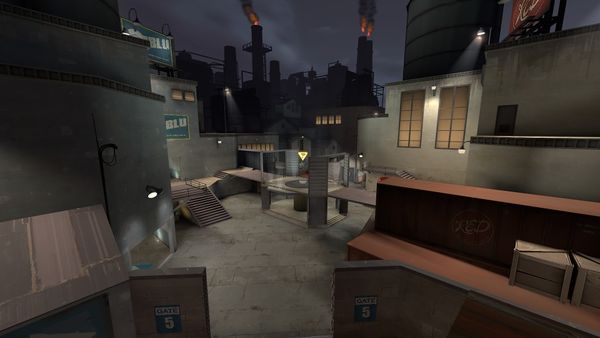 Metalworks is a Symmetric Control Point map made by Scorpio Uprising. It was first used competitively in ESEA Season 13. It was later adopted by ETF2L as one of Season 16 official maps. Metalworks was made official on 7 July 2016, more than a year after it's previous revision, as a part of the long awaited Meet Your Match update.

The map is based on a earlier map map also made by Scorpio Uprising called resonance.

The objective of Metalworks is to control all five capture points. Each team starts with their second and final control points locked, leaving only the middle point available.

The open and spacious design of Metalworks allow for a, more often than not, DM centric play-style. Backcaps are not an uncommon sight, as it is very easy for the aggressive team to fail to lock down all routes.

Metalworks is heavily favored by the North American scene, it has been played in every ESEA season since ESEA Season 13.