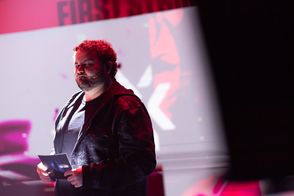 Bernardo "BiDa" Moura (born February 21, 1991) is a Brazilian caster responsible for broadcasting all the world's biggest CS:GO tournaments in Portuguese. He was chosen the sixth most influential person in Brazilian eSports in 2015 [1] and the personality of the year, by the Brazilian community, in 2017.[2]

Before getting involved with the CS:GO scene, BiDa began his studies in Electrical Engineering at a college in Florianópolis. He stopped his studies when he became more involved with the game. Also, before becoming a caster, BiDa tried to become a professional player with his team, Stealth Army.

BiDa's first experience as a caster was during DreamHack Winter 2013, helping Gabriel "FalleN" Toledo cast. However, it was in early 2014 that he began his career in earnest, when he casted the DreamHack Invitational I.

Purchases made using the retail links on this page may earn Liquipedia a small commission.
Retrieved from "https://liquipedia.net/valorant/index.php?title=BiDa&oldid=344176"
Categories:
Hidden categories: