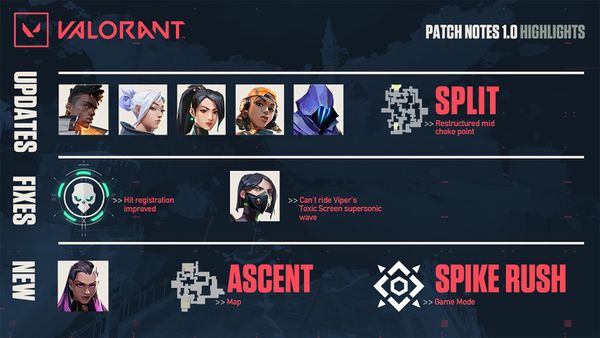 If you’re reading this, it’s too late—VALORANT is launching.

What’s new? Reyna is the latest Agent to join VALORANT—straight from the heart of Mexico. Ascent, an open playground for small wars of position and attrition, enters the map pool. Spike Rush (beta) also arrives to deliver a fresh and more hectic flavor of VALORANT.

Sage, Omen, Phoenix, Raze and Jett all received a decent share of buffs and nerfs respectively to get them ready for launch. This patch also targeted the framerate drops some of you were getting during combat. The devil’s in the details, but know that getting performance where we want for all players is an ongoing process we hope to nail down in the next few patches.

Improvements to hit registration, and a rework of Split’s mid chokepoint joins the healthy list of fixes and updates below.

The team rallied in this patch to fix a number of performance issues. Our focus for this round is primarily on the framerate dips you may sometimes experience in combat. Simpler scenarios, where very little is happening, may not see the same dramatic gains in FPS. Rest assured, we’re not done improving performance and you can expect to see more from us on this subject in upcoming patches.

While we’ve made good progress at addressing hit registration issues, there’s one known issue we haven’t gotten to yet:

We’re also looking into ways to improve the visual clarity of our hit impact effects (especially sparks). In many of the clips that we reviewed, readability issues caused shoulder shots to read like headshots, further contributing to the feeling of hit reg being off.