We are hiring! Check out our developer job postings and work in esports!
Follow us on Twitter @LiquipediaVAL if you'd like to be kept up to date on all things VALORANT! 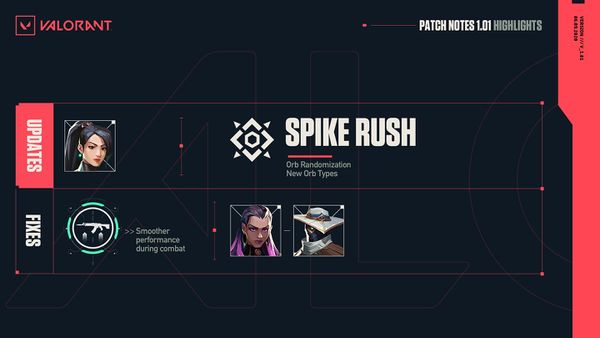 These are lighter, sure, but Patch 1.01 continues our effort to improve performance, this time focused on a smoother combat experience as well as additional support for high spec machines.

Our new mode, Spike Rush, gets an injection of new Orb types to play with. For example, a Golden Gun Orb that lets you one-shot anybody with the quickness.

Also, Sage gets a nerf. Promise we’re not picking on healers.

Our performance work this patch primarily focuses on improving performance during combat and general performance improvements for high spec machines. The game should feel even smoother in combat and many scenes will likely have higher average FPS depending on your spec.