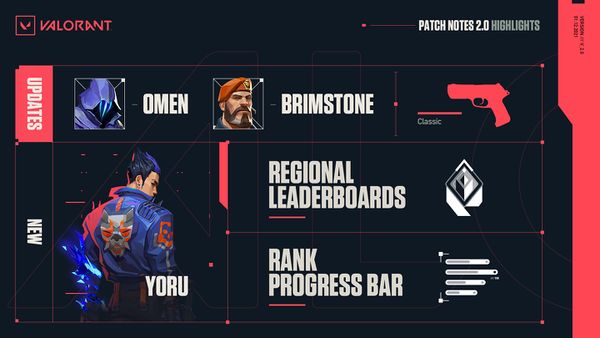 Just because you’ve seen some of it, doesn’t mean you know all of it.

The start of Episode 2 adds Yoru to the roster as well as small but important tweaks to two of our Controllers, Brimstone and Omen (Viper is on the way).

Competitive is aiming for the quality of life award with substantial updates that we’ve summarized here, but laid out in detail in a dedicated article separately. This includes regional leaderboards, more granular rank progress info, ranked rewards, and a ton more.

Read about that and more below.

This patch we have a small update that should clarify and differentiate the strengths of our Controllers. Omen and Brimstone have been in competition since beta and usually only one of them is considered viable. By giving each more clear strengths, we hope to make both Agents strong in different situations. Viper is on our radar as well, we believe she is underperforming and are looking at ways to help her out in the future.

Happy New Year Brimstone players! We know you’ve been hoping for some buffs this holiday season and we have them just in time. Brimstone is all about the big site execute moment. In that spirit, we’ve increased the duration of his smokes and given him more flexibility in where he can position to drop smokes exactly where he wants them. While at it, we didn’t feel Stim Beacon was fitting smoothly into his execution pattern, or into the situations where you might want to use it. Too often Brimstone would pull out Stim Beacon only to see his allies disappearing around a corner, or correctly recognize a fight was coming, pull out stim to get buffed up for it, and get blown up before he could get his gun back up. We think this is a much smoother, more explosive version of Brimstone that we hope you enjoy.

Omen’s role as a Controller is to bring consistent pressure. We needed to introduce some tradeoffs in exchange for the consistent pressure his recharging smokes provide. The projectile speed decrease here is meant to give Omen more pressure and responsiveness when smoking nearby targets, while taking a bit longer to get smokes to far away parts of the map that he isn’t actively covering. Paranoia has been quite strong for a while, and rather than reduce its effectiveness and take away some of the most exciting plays Omen can make, we decided to up the cost. On the whole, this brings Omen’s full utility price up to a level that's more comparable with other Agents as well as making it more important to get value out of Paranoia when you cast it, so that big $400 chunk of cash isn’t wasted.

No updates just yet, but we’re taking this opportunity to say we’ve got our eye on her. We still believe she is underperforming as a whole and we’re looking at changes for her in the new year.