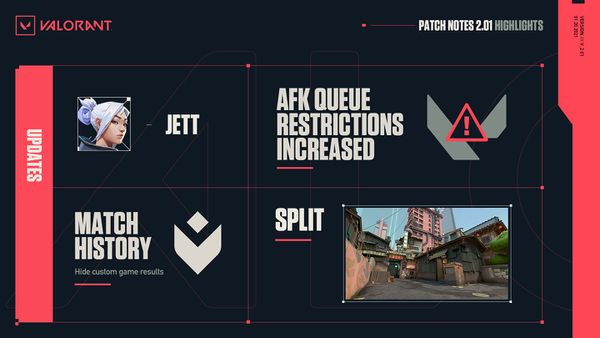 Consider this the Split overhaul patch, and part 2 of the continued Controller role balance.

We also added two oft-requested features: the ability to hide custom matches from your Match History, and an adjustment of queue restrictions, which hope to forgive the unintentional AFK, while still punishing the habitual AFKer.

In a continuation of the Controller changes from Patch 2.0, we felt it was important to consider Jett’s smokes as well. In Patch 1.0, we increased Jett’s smoke duration to 7 seconds (from the then 4 seconds), and we are partially undoing that now. We’ve found that the result of that change was that Jett became a substitute for the Controller role, and reasonably aggressive teams could make use of her Cloudburst smokes to quickly take space without relying on a dedicated Controller. This is part of a pattern of Duelists superseding more utility-focused Agents that we will continue to look at in the future. It’s important that Jett can use her smokes to create temporary windows for the high action plays that define her style, but those windows need to be brief enough to ensure that Controllers are where teams look for team-focused vision blocking.

This Split update is focused around improving attacker options on the map, as well as reducing 50/50 checks, the depth of certain corners, and opening specific areas on the map by increasing chokepoint widths.