Use items to increased attack speed

Attack Speed is a measure of how fast a hero or unit is able to attack.

Using a hero's BCD and IAS, their attack speed (length of time it takes to attack) is calculated using this formula:

The BCD is a unique value for each hero, ranging from 1.64s for the Blood Mage to 2.5s for the Alchemist. The IAS is the combined effect of all attack speed bonuses (and debuffs) stacked additively. Thus, using that agility gives a 2% increase:

The Blood Mage has the shortest base cooldown time

Knowing that a level 1 Blood Mage, with no items or buffs, has 14 agility, the IAS can be calculated as:

The resulting attack speed is found using the BCD

Should the same Blood Mage get a Bloodlust buff, this should increase the attack rate by 40%. The new IAS is:

The resulting attack speed is

Damage per Second (DPS) is why attack speed ultimately matters. A buff that increases the attack rate, will give the player a higher damage output, which could decide the fight in his or her favor. DPS is defined as follows: 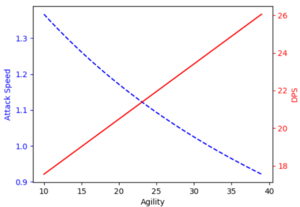 The attack speed and DPS of a level 1 Blood Mage, given a wide range of agility

Using the formulas above, this could be rewritten as

From this formula it’s easy to see that:

Continuing with the level 1 Blood Mage from the examples above, this hero does an average of 24 damage per hit. With no items or buffs, the DPS is therefore given by:

If the hero then picked up a Gloves of Haste, increasing the attack rate by 15%, the DPS added by this could be calculated independently as: