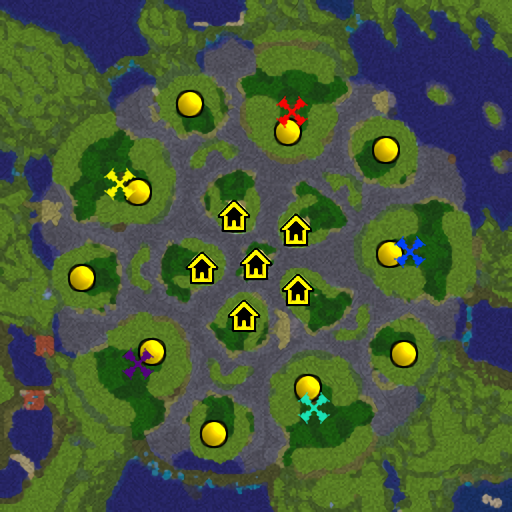 Circle of Fallen Heroes is a 2v2 melee map with five starting positions. The first tournament where this map was played was the Comrades in Arms Cup in January 2020. Since then it has been played in several open cups of the Heroes and Champions series and was adapted by the Warcraft3.info League and the 2v2 Warcraft Champions League as well as tournaments like the New Horizons Cup. On May 21st 2020 the map was included by Blizzard on their Public Test Realm for the patch 1.32.6[1] and on June 2nd 2020 for the full patch release on battle.net.[2] In addition the map was added to the W3Champions 2v2 map pool on June 20th 2020.

Hardly anyone knows or ever knew the path into this place of myths and legends and what secrets are still there waiting to be uncovered.

Besides expansion gold mines there are six neutral buildings on this map. The order of these except for the Tavern which is always in the center of the map is random but always follows this counterclockwise order: Goblin Merchant, Marketplace, Mercenary Camp (Sunken Ruins), Goblin Merchant, and Green Dragon Roost.

Circle of Fallen Heroes invites fast and mass expansion gameplay. Especially the expansion gold mine between two allied starting positions is easy to get and hard to deny. Because of this armies tend to be big rather quickly on this map. Despite the wide areas with shallow water where buildings can't be placed Ancient of War creeping of gold mines has been proven feasable and reliable. Due to the map having five starting positions two opposing players will always be close to each other while the other two will be a bit more removed similar to spawning in close positions on Gnoll Wood. The unused fifth starting position provides the map's only red camp.