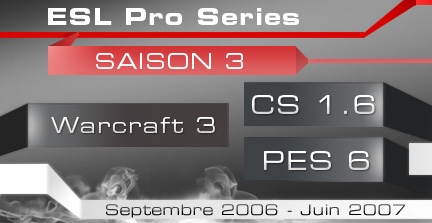 The ESL Pro Series France - Season III is the French National Championship. It's organized, sponsored and hosted by ESL. Only players residing in France are eligible to participate in this tournament. The offline grand final took place in the "Cybercafé Milk" in Paris (France).

The French player eLquA won for the first time, beating his countryman hG in final.

The regular season consists of a single group with 16 players:

The 4 players remaining face in a double elimination bracket:

"ELquA" is not recognized as a Boolean (true/false) value.

The matches of the players who left the league aren't recorded in the table, their opponent got awarded a defwin regardless of the actual result.
A defwin is counted as a 2:0 win.
Lege matches against TrqR and Raven_Ax (respectively Week 14 & 15) had been cancelled, as well as Jayce against FreD (week 15).