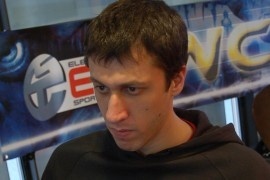 Zdravko "Insomnia" Georgiev (born September 10, 1983) is a retired Bulgarian Human player. He is regarded as one of the most influential Human players of all time, and while he was active he was considered to be one of the strongest non-Asian players.

Insomnia played StarCraft before moving to Warcraft III Reign of Chaos immediately after the game was released. He is the only world champion in the Reign of Chaos version of the game, winning the World Cyber Games 2003 event.

Throughout his professional career Insomnia was part of team SK Gaming, one of the 4 most dominant teams in the history of Warcraft III (together with Meet Your Makers, World Elite, and 4Kings). With SK, Insomnia won WC3L 3 times.

Towards the end of his professional career, Insomnia helped with the establishment of the Bulgarian squad of Team 3wD. The team participated in the national clan league of Bulgaria - BWCL, and finished second on one occasion. However, the team was mostly unsuccessful due to the severe competition of team Just Players (later World Elite Europe), whose squad featured players such as DIDI8 and DieSeL.

Insomnia was the star player of the national team of Bulgaria from 2003 to 2007. He helped the team finish second in European Nations Championship 2006.

After retiring from Warcraft III, Insomnia moved to playing Poker. He currently has his own software business.