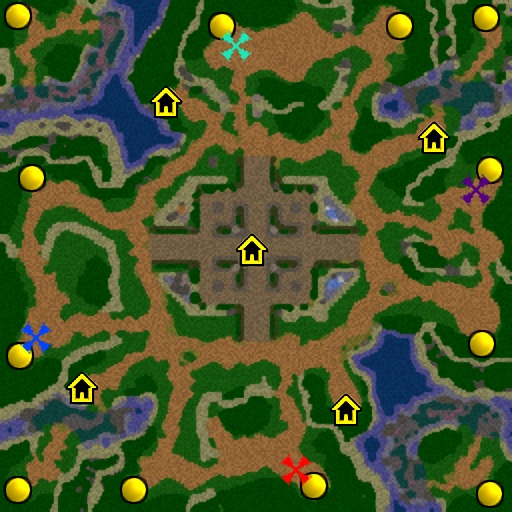 Lost Temple is a four player map made by Blizzard for WarCraft III: Reign of Chaos, and a remake of the famous map Lost Temple created for StarCraft.

For the expansion The Frozen Throne, another version of Lost Temple has been created using Icecrown Glacier tileset but was globally criticized by the players.

Ringed by gold mines, the Fountain of Health beckons. Expand quickly or risk being crushed by your opponents.

There's a Fountain of Health in the middle of the map.

Natural expansion can be quickly taken by creeping it, especially as Human with the help of Militia and the Archmage. The Health fountain in the middle of the map is a strategic spot as it's defended by high-level creeps (Gnolls), and is often a point of encounter between the two opposite armies.

While it has been one of the most played maps in the early years of WarCraft III, it is now nearly never played in tournaments due to the fact that the HP regeneration rate of the Health fountain is based on the number of units HP, therefore favoring Orcs, a race having mainly high-HP units (especially Grunts which are T1 units). In addition, the creeps defending it are easily and fastly doable with the help of the Blademaster, securing a free health regeneration spot for the Orc, without having to spend money on Healing salves.