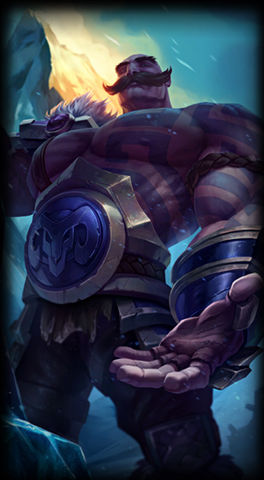 Braum is a champion in Wild Rift.

The Heart of the Freljord[edit]

Blessed with massive biceps and an even bigger heart, Braum is a beloved Iceborn hero of the Freljord. Every mead hall north of Frostheld toasts his legendary strength and tells tales of how he felled a forest of oaks in a single night, and punched an entire mountain into rubble. With his shield, an enchanted vault door forged in ages past, Braum roams the frozen north as a cheerful protector, helping the vulnerable as he works toward his dream of a peaceful Freljord.

Upon reaching 4 stacks, the enemy is stunned and takes bonus magic damage.

Blessed with massive muscles, and an even bigger heart, Braum is a beloved hero of the Freljord. Every child born to the ice knows of his legendary strength, capable of felling entire forests of frost-oaks in a single night or rending the very mountains asunder. With a colossal vault door borne across his back as a shield, Braum roams the land as a friend to those in need and a terrible foe of evildoers.