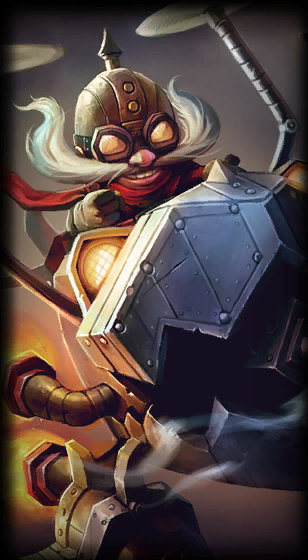 "Death from above!"
Champion Information
Region

Corki is a champion in Wild Rift.

The yordle pilot Corki loves two things above all others: flying, and his glamorous mustache... though not necessarily in that order. After leaving Bandle City, he settled in Piltover and fell in love with the wondrous machines he found there. He dedicated himself to the development of flying contraptions, leading an aerial defense force of seasoned veterans known as the Screaming Yipsnakes. Calm under fire, Corki patrols the skies around his adopted home, and has never encountered a problem that a good missile barrage couldn’t solve.


The Package: Starting at 4 minutes, The Package is delivered to Corki's base. Corki can pick it up to gain the ability to cast Special Delivery, which grants Corki for 60 seconds. Package arrives every 150 seconds.
Phosphorus Bomb

Special Delivery: Unstoppably dashes forward, enemies are knocked aside and the zone deals magic damage per second for 5 seconds and slows by 90%
22/20/18/16
100
Gatling Gun

When Heimerdinger and his yordle colleagues migrated to Piltover, they embraced science as a way of life, and they immediately made several groundbreaking contributions to the techmaturgical community. What yordles lack in stature, they make up for with industriousness. Corki, the Daring Bombardier, gained his title by test-piloting one of these contributions - the original design for the Reconnaissance Operations Front-Line Copter, an aerial assault vehicle which has become the backbone of the Bandle City Expeditionary Force (BCEF). Together with his squadron - the Screaming Yipsnakes - Corki soars over Valoran, surveying the landscape and conducting aerial acrobatics for the benefit of onlookers below.

Corki is the most renowned of the Screaming Yipsnakes for remaining cool under fire and exhibiting bravery to the point of madness. He served several tours of duty, often volunteering for missions that would take him behind enemy lines, either gathering intelligence or delivering messages through hot zones. He thrived on danger, and enjoyed nothing more than a good dogfight in the morning. More than just an ace pilot, Corki also made several modifications to his copter, outfitting it with an arsenal of weapons which some speculate were more for show than functionality. When open hostilities ceased, Corki was forced into a retirement, which he felt cut the engines and clipped the wings.’’ He tried to make do with stunt flying and canyon running, but it was never the same without the refreshing smell of gunpowder streaking through the air around him.