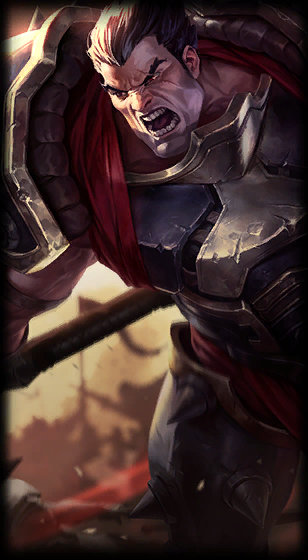 "A united Noxus could control the world - and would deserve to."
Champion Information
Region

Darius is a champion in Wild Rift.

There is no greater symbol of Noxian might than Darius, the nation’s most feared and battle-hardened leader. Rising from humble origins to become the Hand of Noxus, he cleaves through the empire’s enemies—many of them Noxians themselves. Knowing that he never doubts his cause is just, and never hesitates once his axe is raised, those who stand against the commander of the Trifarian Legion can expect no mercy.

Ability
Passive
Affects
Self/Enemies
Damage Type
Physical
Innate: Attacks cause enemies to bleed, dealing physical damage per second over a duration, stacks up to a cap.

Upon reaching max stacks, Darius gains Noxian Might for a duration.


Noxian Might: Gains bonus attack damage and applying full stacks of Hemorrhage instead of 1. Subsequent attacks or damaging abilities refreshes its duration.
Notes

Hitting enemies with the edge of the axe deals more physical damage, heals himself based on his missing health for each champion hit and applies 1 Hemorrhage stack.
9.5/8/6.5/5
35/40/45/50
Crippling Strike

Active: Pulls in enemies in front of him, deals no damage but slowing them instead.
18/16/14/12
45
Noxian Guillotine

Killing the target with Noxian Guilotine refreshes its cooldown, gains Noxian Might and causes nearby minions and monsters to flee for 1.5 seconds.
80/70/60
100/100/0

Darius and his brother Draven grew up as orphans in the port city of Basilich. Darius struggled to provide for them both, constantly fighting with gangs of older urchins and anyone else who threatened his little brother—even the city guard. Every day on the streets was a battle for survival, and Darius earned more scars by his twelfth summer than some soldiers do in a lifetime.

After Basilich was seized by the expanding Noxian empire, the victorious commander Cyrus saw the strength in these defiant brothers, and they found a home within the ranks of his warhost. Over the years, they fought in many grueling campaigns of conquest from one end of the known world to the other, as well as crushing a number of rebellions against the throne.

Within the empire, anyone could rise to power, no matter their birth, culture, or background, and none embraced this ideal more fervently than Darius. From humble beginnings, he rose steadily through the ranks, always putting duty before all else, and garnering great respect for his aggression, discipline, and refusal to ever take a backward step. On the bloodsoaked fields of Dalamor Plain, he even beheaded a Noxian general after the coward ordered a retreat. Roaring in defiance and hefting his bloodied axe overhead, Darius rallied the scattered warbands and won a great and unexpected victory against a far more numerous foe.

He was rewarded with a senior command of his own, attracting many thousands of eager recruits from across the empire. Darius turned the majority away, accepting only the strongest, the most disciplined and iron-willed. Such was his fearsome notoriety, even in the lands beyond Noxus, that it was not uncommon for entire cities to surrender at the first sight of his banners.

After a grinding victory against the cloud-fortresses of the Varju, a proud warrior people who had resisted decades of Noxian aggression, Darius was named the Hand of Noxus by Emperor Boram Darkwill himself. Those who knew Darius best knew he craved neither power nor adulation—he wished merely to see Noxus triumph over all—so Darkwill ordered him and his warhosts far north into the Freljord, to finally bring the barbarian tribes to heel.

The campaign dragged on for years, ending in a bitter, icy stalemate. Darius narrowly survived assassination attempts, ambushes, and even capture by the vicious Winter’s Claw. He was growing weary of endless wars of attrition, and returned to Noxus to demand a reconsolidation of the military.

He marched his veterans into the capital, only to find that the emperor was dead, killed in a coup led by Jericho Swain. The act had been supported by many allies, including Darius’s own brother, Draven.

This was a difficult position. As Hand, many of the noble houses would expect Darius to avenge Darkwill, but he had known and greatly respected the disgraced general Swain, and had spoken against his discharge after the botched offensive in Ionia some years earlier. The oaths of the Hand were to Noxus, not any particular ruler, and Swain was a man who spoke honestly of his new vision for the empire. Darius realized this was a leader he was prepared to follow... but Swain had other ideas.

With the establishment of the Trifarix, three individuals would rule Noxus together, each embodying one principle of strength: Vision, Might, and Guile. Darius gladly accepted his place on this council, and pledged to raise a new, elite force—the Trifarian Legion, the most loyal and prestigious warriors the empire could produce—and lead the armies of Noxus into a glorious new age of conquest.