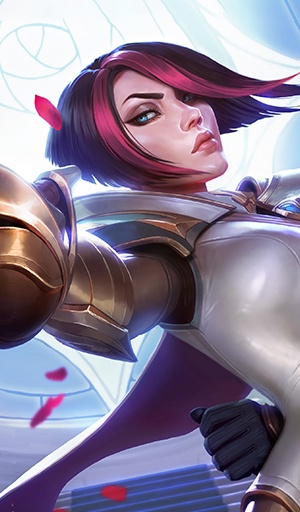 “I have come to kill you for the sake of honor. And though you possess none, still you die.”
Champion Information
Region

Fiora is a melee fighter champion most commonly played in the Baron Lane, and to some extent, in the Jungle as well. Fiora is an excellent split-pusher with

Lunge. She is also considered by most players to be one of the best duelists in the game with and crowd control immunity in

Wielding a rapier, Fiora is the head of House Laurent. She helps train the Dauntless Vanguard, the most prestigious battalion of Demacia, with

Garen. Fiora was set to marry a member of the Crownguard family, leading to Garen's aunt choosing a veteran fighter to defeat Fiora's father in a duel to the death.

The most feared duelist in all Valoran, Fiora is as renowned for her brusque manner and political cunning as she is for the speed of her rapier. Born to the noble Laurent family in Demacia, Fiora claimed the household from her father in the wake of a scandal that nearly destroyed them—now she is dedicated to restoring the Laurents to their rightful place among the great and good of the kingdom.

Innate: Fiora identifies the of nearby visible enemy champions, marked as an arc around them. linger while Fiora remains near the target, otherwise the will disappear. After a ends, Fiora identifies a new one on her target.

Fiora's damage against a will trigger it to deal bonus true damage, heal Fiora (based on level) and grant her that decays over time.
Notes

Active: Fiora dashes a short distance in the target direction and then stabs a nearby enemy, dealing physical damage.

Active: Fiora enters a defensive stance, becoming unable to act but prevents the application of all non-turret damage to her and gaining debuff and crowd control immunity.

Fiora then stabs in the target direction, dealing magic damage to all enemies hit until colliding with the first enemy champion.

The enemy champion struck is slowed and crippled for a short duration. If Riposte negates at least one hostile immobilizing effect, Fiora stuns the target for the same duration instead.
18/16/14/12
50
“En garde!”
Notes

The first attack slows the target for a short duration but cannot . The second attack will (including structures).

Active: Fiora challenges the target enemy champion for a short duration, highlighting all four of their .

While in effect, Duelist's Dance does not identify new on Fiora's target.

While near the target, Fiora gains Duelist's Dance's .

If Fiora triggers at least one before the target dies, or triggers all four, she creates a at their location for a short duration, which heals Fiora and all allies within the area every second.

All videos are made by SkinSpotlights Wild Rift on YouTube.