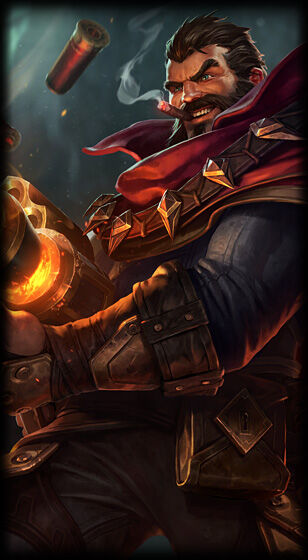 "We're here for your gold, not your heads, so don't nobody decide to be a hero."
Champion Information
Region

Graves is a Marksman class champion in Wild Rift.

Malcolm Graves is a renowned mercenary, gambler, and thief—a wanted man in every city and empire he has visited. Even though he has an explosive temper, he possesses a strict sense of criminal honor, often enforced at the business end of his double-barreled shotgun Destiny. In recent years, he has reconciled a troubled partnership with Twisted Fate, and together they have prospered once more in the turmoil of Bilgewater's criminal underbelly.

Double Barrel: Graves must reload when he runs out of ammo. Attack speed reduces reload time slightly, but reduces time between attacks dramatically.


Buckshot: Bullets cannot pass through enemy units. Non-champions struck by multiple bullets are knocked back slightly.
End of the Line

1
Ability
Point Target
Affects
Enemies
Damage Type
Physical
Active: Fires a powder round that deals physical damage and then detonates after a while to deal an additonal physical damage.

2
Ability
Area of Effect
Affects
Enemies
Damage Type
Magical
Active: Throws a canister that creates a cloud of smoke for seconds. Enemies within the smoke are affected by Nearsight.

Enemies caught in the initial impact take magic damage and are slowed.

Dashing towards an enemy champion gains 2 stacks instead.


Active: Dashes in a direction, reloading one shell and gains True Grit for a duration.

4
Ability
Point Target
Affects
Enemies
Damage Type
Physical
Active: Fires an explosive shell that deals physical damage and knocks Graves back from recoil. The shell explodes upon hitting an enemy champion or reaching the end of its range, dealing physical damage in a cone.

Enemies damaged by the shell's initial impact do not take damage from the explosive cone.
90/70/50
100

Malcolm Graves is a wanted man in every realm, city, and empire he has visited. Tough, strong-willed, and above all relentless, through his life of crime he has amassed (then invariably lost) a small fortune.

Raised in the wharf alleys of Bilgewater, Malcolm quickly learned how to fight and how to steal, skills that have served him very well over the years. Smuggling himself to the mainland in the bilge of an outgoing cargo ship as a youth, he stole, lied, and gambled his way from place to place. But it was across the table of a high-stakes card game that Malcolm met the man who would change his life: the trickster now known as Twisted Fate. Both men saw the same reckless love of danger and adventure in the other, and a dysfunctional partnership that lasted nearly a decade was born.

Combining their unique skills, Graves and Twisted Fate were an effective team, pulling off scores of heists. They stole from and swindled the rich and foolish for cash, fame, and the sheer thrill. Adventure became as much of a lure as the payoff.

On the borderlands of Noxus, they set two renowned houses at each other’s throats as cover for the rescue of an heir apparent being held hostage. That they pocketed the reward money only to ransom the vile young man to the highest bidder should have come as no surprise to their employer. In Piltover, they hold the distinction of being the only thieves ever to crack the supposedly impenetrable Clockwork Vault. Not only did the two empty the vault of its treasures, but they tricked its guards into loading it onto their hijacked cargo ship. Only once the pair were over the horizon was the theft discovered, along with Fate’s trademark playing card.

But eventually their luck ran out. During a heist that went wrong, Twisted Fate seemingly betrayed and abandoned his partner. Graves was taken alive and thrown in the infamous prison known as the Locker.

Years of imprisonment and torture followed, during which time Graves nursed his hatred for his former partner. A lesser man would surely have broken, but Malcolm Graves endured it all and finally escaped. He clawed his way to freedom and began his pursuit of Twisted Fate, the man whose treachery consigned him to a decade of unspeakable misery.

Years later, Graves finally had his showdown with Twisted Fate. Yet, after learning the truth of what had gone down between them and escaping certain death at the hands of Gangplank with his old comrade, Graves put his vengeance aside. Older, if not wiser, the pair look to pick up where they left off, seeking to make themselves rich using their unique blend of trickery, heists, and focused violence.