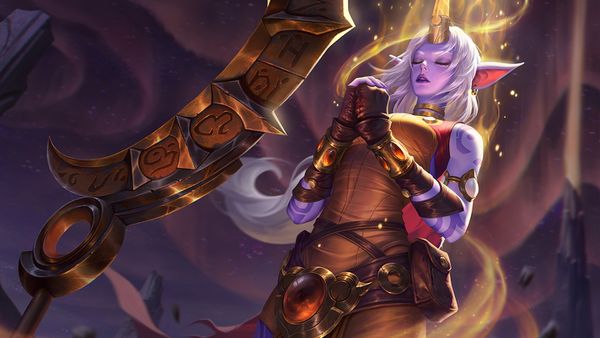 With the yordles all rounded up from their adventure, it’s time to look to the future. And… maybe the recent past? Check out Replays and Spectator Mode, along with the Lunar Beast event, featuring six new skins (including Wild Rift-exclusive Lunar Beast Miss Fortune). Later, Xayah and Rakan will be dancing their way into the Duo Lane. Welcome to Patch 2.1!
Ben “Draggles” Forbes
Jonathan "JCM1117" Chao
(Patch 2.0)

Replays are now available for your 50 most recent matches! Play back your game as it happened to improve your play or relive those unforgettable moments. Replays feature a new HUD, showing both teams’ items, summoner spells, gold earned, and more.
Riot Games (Patch 2.1) 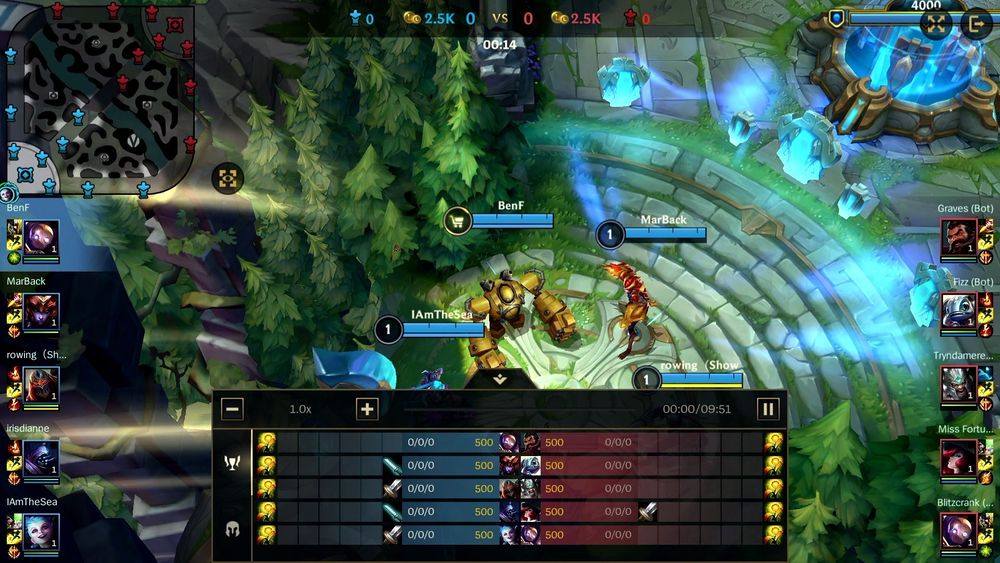 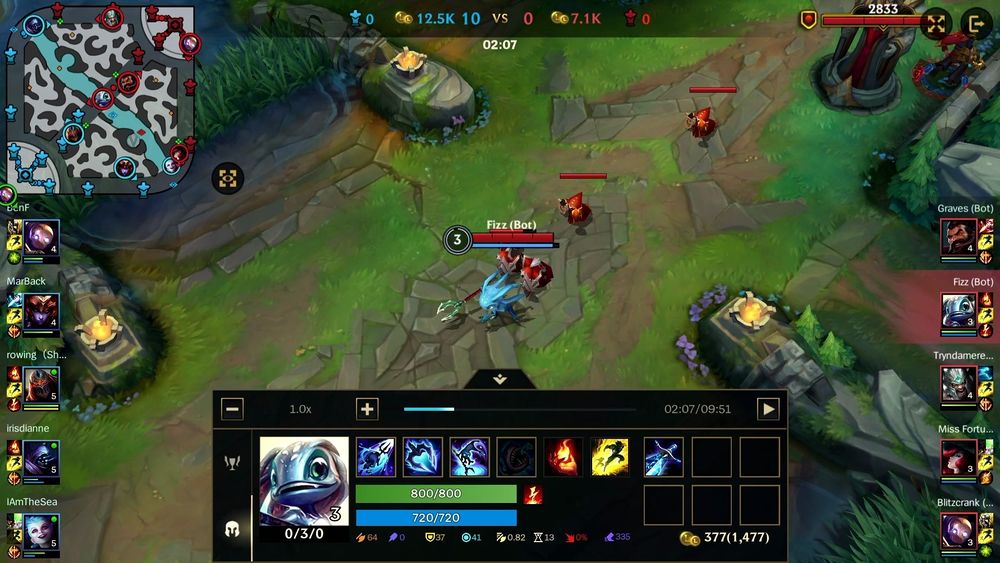 Empower the relics of revels past to tame the Beast and save the day.
Riot Games (Patch 2.1) 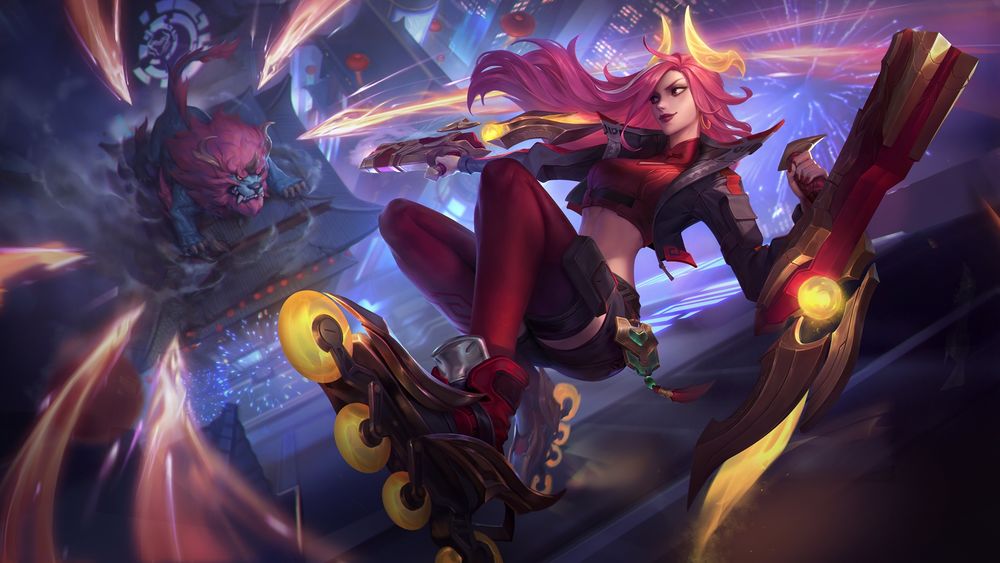 Deadly and precise, Xayah is a vastayan revolutionary waging a personal war to save her people. She uses her speed, guile, and razor-sharp feather blades to cut down anyone who stands in her way. Xayah fights alongside her partner and lover, Rakan, to protect their dwindling tribe, and restore their race to her vision of its former glory.

Xayah will be released later in the patch.
Riot (Patch 2.1)

As mercurial as he is charming, Rakan is an infamous vastayan troublemaker and the greatest battle-dancer in Lhotlan tribal history. To the humans of the Ionian highlands, his name had long been synonymous with wild festivals, uncontrollable parties, and anarchic music. But this energetic, traveling showman has left his old life behind, dedicating himself to the cause of his lover, the rebel Xayah. Together, they seek to free Ionia’s wild magic, restoring the vastaya’s birthright. Rakan will be released later in the patch.
Riot (Patch 2.1)

Corki isn’t delivering on his high-flyin’, high-falutin’ antics, especially given his identity as a marksman mage. We’re adding a bit of satisfaction to his arsenal.
Riot (Patch 2.1)

Jarvan’s been underperforming for a while now so we’re giving him some buffs to make him a more worthy contender.
Riot (Patch 2.1)

Jax has been underperforming in matchups we expect him to be stronger in. Amping up his gap closing so he can snowball better, particularly in situations against squishy ranged champions.
Riot (Patch 2.1)

Fixing an issue where Kai’Sa wasn’t hitting as hard as she should.
Riot (Patch 2.1)

Electric ninja rat too strong, especially as a lane bully and burst mage. We’re tuning him down across the board.
Riot (Patch 2.1)

Our last changes made it so Sonic Wave (1) sometimes can’t reach a target kicked back by Dragon’s Rage (Ult). We’re adjusting the range to make this combo reliable again. We expect this to be a light nerf, but Lee Sin is for the most part in an okay spot.
Riot (Patch 2.1)

A light nerf to Lulu’s mana and ult to de-enormify her laning power.
Riot (02/05 Hotfix)

Ori’s Shockwave is available a little too often in the early-to-mid-game.
Riot (02/05 Hotfix)

Tristana’s abilities feel very lackluster, and her signature Explosive Charge (3) is not living up to its promise of being a huge nuke when fully stacked. We’re amping up all of her explosive powers to help her keep pace with other bot laners.
Riot (Patch 2.1)

Twisted Fate has been underperforming especially in higher levels of play. We are making it more rewarding to players who are able to select the right card in the right situation.
Riot (Patch 2.1)

Yasuo’s ultimate sometimes feels more like a Last Sigh. Currently it feels like it takes too long to complete the animation so we’re speeding it up, and also increasing its damage in the late game.
Riot (Patch 2.1)

We believe Youmuu’s is offering too much as a single item and needs to be trimmed down a bit to have a clearer (and weaker) purpose. We’re reworking the Momentum passive to only stack Movement Speed at a baseline instead of also converting Momentum into magic damage. Since our goal is not to nerf Dead Man’s Plate, we will be adding the Momentum to magic damage conversion onto Dead Man’s Plate’s Crushing Blow passive.
Riot (Patch 2.1)

Stacking the effects of the Redemption or Locket Enchants should come at a cost similar to multiple Heals. We’re adding some restrictions to preserve active enchant diversity.
Riot (Patch 2.1)

Added the ability to see your exact latency in game.

By popular demand, added the ability to choose the order in which enemies appear when using Portrait Lock.

The in-game chat settings have been updated. All / Team / Off is now All / Team / Party. The new Party setting allows for premade party chat while hiding chat from other team members.