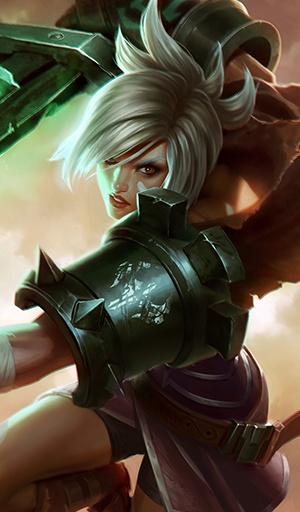 "A warrior’s blade reflects the truth in their heart. Mine is black, and broken."
Champion Information
Region

Once a swordmaster in the warhosts of Noxus, Riven rose through the ranks on the strength of her conviction and brutal efficiency, and was rewarded with a legendary runic blade and a warband of her own. However, on the Ionian front, Riven's faith in her nation was tested and ultimately broken. She severed all ties to the empire, seeking to find her place in a shattered world, even as rumors abounded that Noxus had been reforged. Now forced to return in chains, she faces the judgment of her former homeland...

1
Ability
Point Target
Affects
Enemies
Damage Type
Physical
Active: Slash in a direction, can be cast up to 3 times. Each slash deals physical damage to nearby enemies.

The third slash crosses terrain and knocks up nearby enemies, knocks back if she is very close.
13
Notes

2
Ability
Area of Effect
Affects
Enemies
Damage Type
Physical
Active: Causes her sword to emit a burst of runic energy around her, stunning nearby enemies and dealing physical damage.
10/9/8/7
Valor

3
Ability
Movement
Affects
Self
Active: Dash in a direction and gains a damage-absorbing shield for a short time.
10/9/8/7
Notes

Blade of the Exile