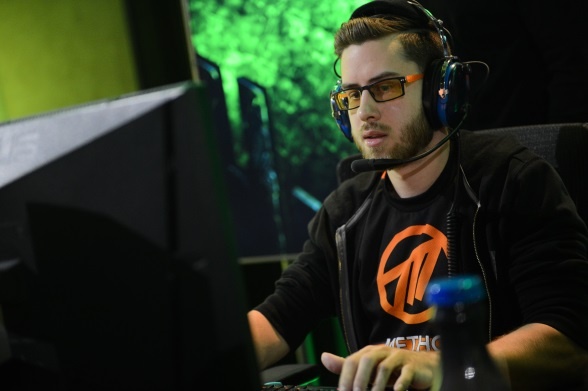 Cdew started playing World of Warcraft in Vanilla, after his fiance’s dad introduced him to the game. He first hit the esports scene as 'Tenderloin' on Team Evil Geniuses at an ESL Extreme Masters III Global Final in March 2009.[1]. He made it to the North American Regionals that same year and placed third in the tournament.

In 2012, Evil Geniuses brought in Talbadar to join Cdew and Azael. This was the first year that Cdew reached the Arena World Championship. The team placed 4th.

Cdew continued as a first class World of Warcraft Arena player, returning to the 2014 BlizzCon World Championships with Snutz and Venruki under the team name 3 Amigos. Placing 3rd overall.

Cdew returned to the BlizzCon Finals in 2016 with team Method NA consisting of Snutz, Smexxin and Beanslayer. This was a hard fought tournament, however they lost to Splyce in the Grand Final, earning them 2nd place.

In April 2017, Method renamed Cdew’s team Method Reborn, and Smexxin was replaced with Samiyam. Despite this change the team missed out on qualifying for the World Championships in 2017.

In January of 2018, Method Reborn was disbanded, and Cdew formed a new team with Mes and Trill named Method Orange. It was this team that finally brought Cdew his biggest success yet, winning the 2018 Arena World Championship at his fifth attempt at doing so, winning a career best $120,000 in prize money for the team.

On June 26, 2020, the Method Orange roster led by Cdew withdrew from their contract with Method in search of a new organization to represent them going forward. [2]

Following the Method fallout, Cdew and his team were able to secure sponsorship under the newly created team OTK Network on October 11, 2020, but competed for the rest of the BfA AWC tournaments as "Mystery Org" until OTK announced their creation later that year.